Trina Roache
APTN National News
A Mi’kmaq father in Nova Scotia who battled to get his children back from foster care says the agency that took them is just a modern day residential school.

“It really is just a modern day residential school, all these social workers, they’re just nuns without the uniforms.”

Those words by the father who cannot be named are echoed by many across Nova Scotia’s First Nations.

Others call it the millennium scoop. The perception that child welfare workers are taking more and more Mi’kmaq children out of their homes and out of their communities is a phrase uttered by health directors, First Nation leaders and grassroots.

That perception was noted in an external review of the agency. Cooney Consulting did a review of how the Mi’kmaw agency operates and noted, “In 2013, to have the Mi’kmaw community relate the current MFCS practices to a “scoop” of their children is disturbing.”

APTN obtained a copy of an early draft of the report that included responses by senior management from the agency, who called this “a gross misrepresentation of the number of children taken into care.”

It’s a disheartening perception for Kristen Basque. She works for Mi’kmaq Family and Children’s Services.

Basque says the number of Mi’kmaq kids in care is fairly stable, peaking at around 500 children in the last five years. It’s still a number that’s out of line with the rest of the province. Aboriginal children make up 21 per cent of the kids in care in Nova Scotia but Mi’kmaq living on reserve only make up three per cent of the population.

The numbers haven’t dropped either and that was the goal of the federal government’s Enhanced Prevention Focused Approach (EPFA), a new way of paying for First Nations’ child welfare. The Mi’kmaw agency signed on in 2008 for two million dollars more a year.

According to an internal document from Aboriginal Affairs, the new funding meets “the real needs of agencies,” provides an extra stream of money “for prevention/least disruptive measures that would enable agencies to assist families at risk in their own homes…and would enable agencies to re-invest surpluses into further prevention work (which would in turn generate greater surpluses as fewer children were taken into care).”

That logic hasn’t panned out.  In another document, MFCS senior staff wrote, “The Agency verbally expressed serious concerns with the Enhanced Funding model given the reality that it would not meet  projected needs.”

“I think our biggest challenge is being underfunded and we would love to put in a lot of preventative programs,” said Basque.

Basque says take family group conferencing. It’s a popular program she runs that brings the family together in a talking circle to work out a plan to stay together. But it happens after the kids have been taken into care or the parents have been dragged to court. And Aboriginal Affairs doesn’t pay for it. The agency covers the cost.

“I’ve been to many meetings and working groups and that’s something that’s always been a hot topic,” said Basque. “Why aren’t we doing this more? Why aren’t we expanding this?”

There is no player at http://bcove.me/du1e1jwb.

The answer isn’t a simple question of money. It’s also a matter of how prevention is defined and that changes depending on who you ask.

“They don’t help families in the beginning. They will tell you they don’t have enough funding for that,” said Paul. “Once they’re coming to see you and if you want some kind of service that costs money then they’re going to say well, we need to have your child in care to access the funds so there’s a problem with that.”

The 2013 Cooney review interviewed community members, agency staff and other stakeholders. It noted a sense that the agency was focused on child protection while “Early intervention and preventative services were reported as having all but disappeared.”

The agency does run an early intervention program. In a response to a draft of the Cooney report, MFCS senior staff said it falls under the umbrella of child protection because it only kicks in once “a risk has been substantiated.” And points out, “When the agency is so underfunded, then the most needed mandated child protection services are the priority.”

If families are getting help, does it matter if it’s called early intervention, or prevention, or protection?

Aboriginal legal aid lawyer Jennifer Cox said it does. And she point to supervision orders as an example, paid for by AANDC prevention dollars.

When a social worker gets the call that there’s a problem in a family home, they can decide to take the children into care, make sure the parents go to rehab, take parenting programs or counselling. But to make sure the parent follows through, the agency relies on the courts to issue supervision orders.

It means the child can stay in the home or with family. It fits with AANDC’s thinking on prevention as “least disruptive measures.”

That might make sense on paper, but Cox said the reality for parents is harsh.

“It’s not as easy as maybe people might make it out to be for these parents. It’s a very, very terrible process for them.”

Critics say the agency relies too heavily on the courts to solve family issues. And it doesn’t always fit what the family needs.

The Mi’kmaw father who had his kids taken into temporary care became involved because of family violence. But he was the victim of the assault and the agency still took him to court, where he was ordered to undergo counselling and drug testing.

It took him two months to get his kids back. But the experience has left him bitter.

Jennifer Cox has seen this play out in court time and time again. Once a child welfare case hits the courts, the clock is ticking. If the parents don’t do everything the court has ordered within a certain timeframe, the kids go into care.

“The system isn’t set up to deliver services to families unless there’s court action or litigation,” said Cox. “And that’s part of the difficulty with these cases, the funding model is backwards. It doesn’t match the needs of the communities.” 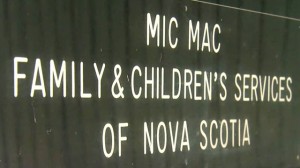 And the funding model doesn’t match provincial legislation either. Mi’kmaw Family & Children’s Services has to follow Nova Scotia’s child welfare act, but use federal dollars to do it. So while AANDC calls supervision orders prevention, the province calls them protection.

Cox said it creates a gap for Mi’kmaw families who need help.

“Some of the services available in the prevention pot of money available off reserve is significant,” said Cox. “So you don’t necessarily have to have a court proceeding in the mainstream population to get these services you need to address the concerns so that the children don’t have to be removed and the agency doesn’t have to watch you.”

Brenda Cope in in charge of the finances for Mi’kmaw Family & Children’s services.  It’s a juggling act, moving money around to meet both provincial standards when those federal dollars come attached with rules of how the agency can spend.

“It means we have to provide services we have no funding for,” said Cope. “So if they say that we should be doing this, that and the next things, but AANDC will then come along and say, well yes, but we’re not paying for it because it’s not in our authorities. So what do you do? You have to provide the services but you have no funds to cover it.”

In 2013, Cope testified before the Canadian Human Rights Tribunal. The complaint, launched by child welfare advocate Cindy Blackstock, argued the department of Aboriginal Affairs discriminates against First Nations because the money it provides for child welfare falls short of what the provinces provide for off-reserve care.

“I’d call it discrimination,” says Cope.  “I’d also call it plain stupid, because how you expect us to provide the same service as the province with 30 per cent less income, I have no idea.”

The case wrapped up last fall and a decision from the Tribunal is expected this spring.

Briefing notes to prepare AANDC official Dougal MacDonald for his testimony at the tribunal in December, 2013, throw the onus for budget problems back on the agency, citing an “explosion of the use of supervision orders.”

“These court ordered interventions could be done as prevention work if: a/ the agency had the kind of working relationship with families and community service providers that enabled cooperative case planning , and b/ dedicated prevention funding and staffing set aside to do this kind of preventative work.

In the absence of the conditions, the agency is forced to resort to coercive methods such as taking families to court to compel them to work with the agency.”

It’s a blame game that goes around in circles. Not enough money, problematic policies and a persistent negative view of the agency.

“Because a lot of communities do not trust Mi’kmaw Family, you won’t see the schools or the daycares or the preschools or health centers reaching out to Mi’kmaq Family,” said social worker Corrina Milliea. “They’re afraid to, I guess, get the family involved and then thinking that the child will be taken away from them.”

Milliea worked in child protection for the agency three years ago.

“Unfortunately, what happens is when we do go to a home and we find out there’s domestic, a lot of times the kids are taken out faster than we can do prevention.”

Today, Milliea is a community social worker for the Millbrook First Nation. She sees the both potential and challenges facing child welfare.

“I think it’s really just building bridges with the community. There’s the health centers, different services you can be using to help these families,” said Milliea. “But Mi’kmaw Family does not reach out to community services as well. So how do you do prevention when you can’t work together as a community?”