Every Friday during the summer, Metis Crossing, Alberta offers a four hour experience called “Paddle into the Past.”

Participants experience what it was like for the Metis in the area as they lived as fur traders, including the hunt for buffalo beside the North Saskatchewan River in 1860.

Mackenzie Brown, who works for both the Edmonton and Alberta governments as an Indigenous tourism developer said she’s excited about the experience.

“So we are going to be doing the Voyager experience. Getting a tour around the space,” she said.

“Yeah, I’m really excited about it.”

The group on this Friday learn how to finger weave and each make their own bracelets using the colours of the Metis sash.

They also learn about trapping, and how to jig to the Metis fiddle.

He said the jigging is always a favorite with visitors.

“There’s a certain uplifting spirit that happens when we are in the old Comadrie house,” he said.

“And everybody does the Red River Jig. At the end of that, the smiles are really wide and genuine.”

(On an authentic Voyageur canoe on the North Saskatchewan river on the way to Victoria Settlement. Photo: Chris Stewart/APTN)

The visitors began the journey down the North Saskatchewan River.

After 45 minutes of paddling, the group arrived at Victoria Settlement where there was once a trading post.

The Metis families would have sailed on canoes with their furs to trade here.

“Well you can’t tell the Voyager story without a canoe and a river. Metis Crossing is situated on five river lots. And we thought what a better way to tie in the fur trading fort that is five kilometers down the river, than with a voyager canoe ride.

“We really saw that as the highlight of the tour.” 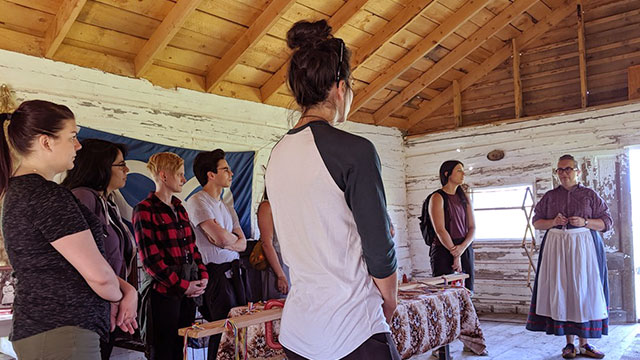 At the end of the day, the group unanimously called it a fantastic outing.

They said they’d be recommending it.

“It felt really great! it was nice to learn the different techniques that they used. Whether its rug making, or keychain making, alot of the jewelry making

“It was really interesting to hear the stories on how they lived.”

Paddle into the Past runs each Friday until August 16.

Indigenous film festival based out of Manitoulin Island go...

Probe into systemic racism in B.C. healthcare due in month...

Mother speaks out after son’s arrest by Saskatoon po...