InFocus
It’s a shameful bit of Métis history Manitobans are just starting to learn about.

Back in 1939 a thriving Métis community of 400 people near Binscarth, 334 kilometres northwest of Winnipeg, was set ablaze by a rural government, with the blessing of the provincial and federal governments, to make room for a community pasture for settlers’ cattle.

Being the Dirty 30s, the families were barely making ends meet as it was – most of whom were working for area farmers just to feed their families and had no money to simply up and relocate. 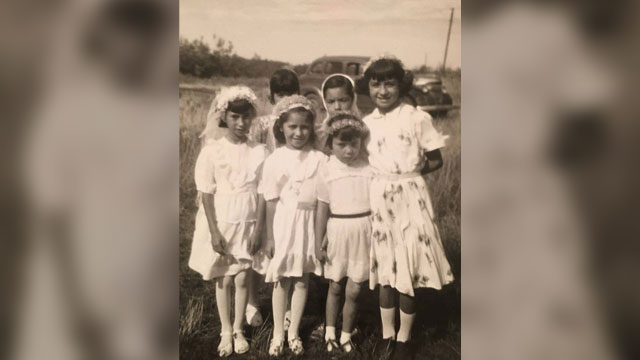 (Verna Demontignym, front row second from the right, recalls her father retelling the story of how they came home from work to find their home and community torched and dogs shot. Photo courtesy: Pat Desjarlais.)

After their village was burned, the tight-knit community was forced to scatter to nearby towns, many with nothing but the clothes on their backs.

Elder Verna Demontigny recalls her dad telling her the story later of how he’d taken his family away to work and when they came back, found their home and community destroyed.

“He was gone all spring, all summer long, coming back in the fall, his house was burnt to the ground already.” Demontigny said “He got there with his family and his dog was running around so his dog was shot in front of him. He said you could listen to (government authorities)  talking. but ‘I couldn’t do nothing’ he said, ‘they had guns.’”

Watch our panelists talk about Ste. Madeleine on InFocus with Host Melissa Ridgen

Descendant Roger Smith’s family is buried at Ste. Madeleine – the cemetery’s iron archway being the only thing that remains there.

He was instrumental in the Manitoba Museum’s exhibit Ni KishKishin, I Remember Ste. Madeleine being established last spring to ensure the tragic history doesn’t continue to be swept under the rug in Manitoba.

“I have ancestors that mean a lot to me,” Smith said. “It’s our history and we can’t forget.”

(All that remains of the former village is this archway, a cemetery and a shrine hold the bell that once sat atop the community’s church. Photo: Melissa Ridgen/APTN)

Every year in July for the past 30 years, descendants and supporters gather at the old town site for Ste. Madeleine Days. Despite not having a town, Ste. Madeleine’s community spirit continues to live on through the annual event.

The Manitoba Métis Federation is working to have the Manitoba government give the land back to the Métis.

“If you want to reconcile , let’s reconcile,” said Minister Will Goodon of the MMF Southwest Region. “We’ve been waiting and asking and pounding on doors – just open the door and let us in. Let’s figure this out – it’s not hard.”