McGill University in Montreal has decided that it’s time to get rid of its long time sports team name the Redmen.

While the university’s nearly 200 year history has seen prime ministers and Nobel Prize winners attend its institutions, the Redmen name for its varsity sports teams have been subject to much criticism for using a name that Indigenous students find offensive.

The name first appeared in 1927 as a reference to the team’s colours and Scottish heritage of its founder James McGill.

“Even though that may be the origins of the name, because of how it’s been used and the imagery that’s been associated with it, you can’t remove those connotations from a name,” said Catie Galbraith from the McGill student’s alliance. 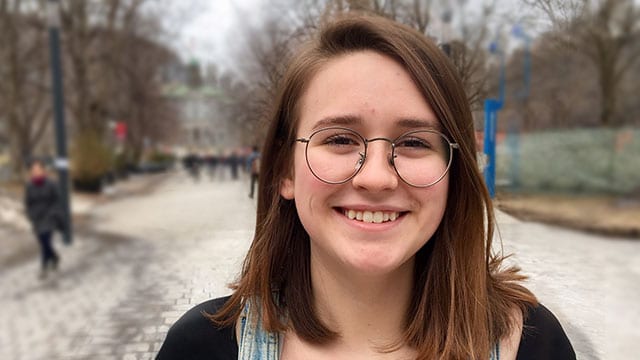 (“We’re hoping that this is the first step in making Mcgill a better place for Indigenous students,” says Catie Galbraith. Photo: Tom Fennario/APTN)

According to a 2015 presentation by former McGill student Raymond Grafton, the name quickly evolved into something else.

The presentation uses yearbook and school paper references to show that in the 50’s intermediate teams became known as Indians.

In the 1960s the women’s teams were referred to as squaws.

In the 1980s a distinctly Indigenous logo was created and added to the uniform.

And in the 1990s, Mcgill put an end to all Indigenous references towards the Redmen name.

“Redmen is still, in the dictionary, it’s a slur,” she said. “Even if it wasn’t meant to be when they chose the name, it’s still a slur and to people who aren’t familiar with the history, that’s all they’ll get out of it.”

Galbraith, who is Native American from the Chickasaw Nation,  was part of student led movement last year to change the name.

“Inclusion and respect are at the core of our university’s principles and values,” she said in the statement. “For these reasons, the Redmen name is not one that our community would choose today, and it is not one that Mcgill should carry forward.”

Galbraith said that Indigenous students have long been arguing for a name change, and she credits those that came before her for laying the groundwork.

She just wishes that their efforts had been acknowledged sooner.

“We’re happy the name has changed, we’re not happy with how long it has taken, we’re very hopeful for the future,” she said.

“And we’re hoping that this is the first step in making Mcgill a better place for Indigenous students.”

Born and raised in Montreal, Tom cut his teeth working in community television in Kahnawake Mohawk Territory before joining APTN as a cameraman/editor in 2008. In 2015 he was promoted to Video Journalist and has since helped cover important stories such as the Muskrat Falls protest in Labrador and anti-pipeline actions in North Dakota.