Editor’s note:APTN News
First Nation leaders in Manitoba say the provincial government’s announced child welfare reform this week ignores efforts by Indigenous communities that are trying to regain jurisdiction over their own children.

On Wednesday the Assembly of Manitoba Chiefs (AMC) issued a statement criticizing Monday’s announcement by the province that it will move to block funding for child welfare in April of this year.

On Monday Manitoba Families Minister Heather Stefanson said block funding for Child and Family Services (CFS) will fund the province’s four CFS authorities up front “to improve outcomes for children and families, not by the size of their caseloads or the length of a child’s stay in care.”

The province, which has the highest rates among provinces and territories of Indigenous children in state care, had come under fire for operating a child welfare system in which agencies were funded based on the number of cases.

Under that model, First Nation leaders and other critics have argued, agencies are incentivized to have children in care while also lacking resources to support families and prevent child apprehension.

Manitoba was also criticized for forcing CFS agencies to turn over federal funding they received through the Children’s Special Allowance. The province previously argued those federal funds were a duplication of its existing investments into CFS.

That practice will end with the block funding, Stefanson said Monday.

“We want to give agencies the freedom to devote more money to prevention, early intervention, community and kinship involvement, and other positive supports,” the minister said, adding “the new model helps reduce their administrative burdens and improves autonomy and accountability.”

But, potentially days away from the Trudeau government’s promised child welfare legislation, Manitoba chiefs aren’t pleased with the province’s move.

“The province of Manitoba continues to ignore the longstanding position and resolutions of the AMC Chiefs-in-Assembly that seeks to reassert First Nations’ jurisdiction and approach to our children and families,” Hudson said in Wednesday’s statement, adding the province did not consult with First Nation leadership on the decision.

The AMC has been fighting 30 years for First Nations jurisdiction over their own child and family matters.

Presently, more than 11,000 children in Manitoba are in care. Ninety per cent are Indigenous.

It’s 2014 “Bringing Our Children Home” report recommended, among other things, transitioning to a First Nations CFS system and a model of care focused on prevention.

A subsequent 2017 report titled “Keewaywin: Our Way Home” determined that Manitoba’s CFS system “is simply an extension of cultural genocide practices found in the residential school system and 60s Scoop.”

It put forth a First Nations-led plan for CFS reforms and options for implementing Jordan’s Principle.

“First Nations never conceded jurisdiction of our children,” the report reads. “This was taken from us through years of purposeful, adversarial and invasive government Indigenous child welfare policies.

In December 2017 AMC signed a memorandum of understanding with Canada to address the province’s child welfare crisis.

Former Indigenous Services minister Jane Philpott said the MOU was “an important step forward,” and that the parties were “focusing on improvements that First Nations in Manitoba want to see in the child welfare system.”

AMC Grand Chief Arlen Dumas said at the time that “grassroots citizens insist we take back jurisdiction of our children and enhance First Nation capacity in all areas to address the Child and Family Services crisis in Manitoba.” 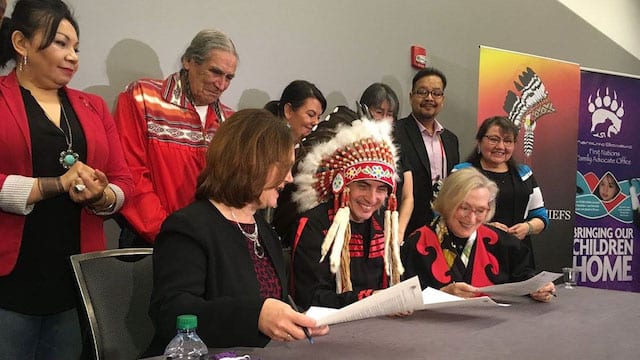 The Assembly of Manitoba Chiefs and Canada signed an MOU on child welfare in December 2017. AMC photo.

Last year talks began between the AMC and federal government for First Nations in Manitoba to have their own federal child welfare legislation.

The AMC consulted with community members, its women’s council, and then began drafting its vision for federal legislation it hopes Canada will table in the House of Commons.

The Bringing Our Children Home Act was taken to ceremony and feast, and later reviewed by the AMC Women’s and Elder’s Councils.

It was officially adopted in an AMC resolution last October.

In December it was supported by the AFN at its special chiefs assembly in Ottawa.

A number of sources have also come forward to say the latest draft bill doesn’t include the transfer of full jurisdiction over child welfare from the provinces to First Nations, which some leaders have said they were told was “doable” by Philpott.

Current Indigenous Services Minister Seamus O’Regan, and Trudeau himself, have indicated the feds are considering First Nations’ concerns and working to table the legislation soon.

With only 12 weeks remaining on Parliament’s sitting schedule before the fall election, there’s already a significant chance any newly tabled legislation won’t make it through the legislative process in time.

A resolution passed at December’s AFN assembly in Ottawa calls for Canada and Manitoba First Nations to “jointly draft a mutually agreeable draft Bill” of the Bringing Our Children Home Act “for Canada to introduce in the House of Commons in the very near future, after the federal enabling legislation has been passed.”

Last September, the Manitoba government produced its own review of the CFS system.

A report for the province’s Legislative Review Committee concluded that those who participated in consultations and information gathering processes “generally agreed that the existing CFS legislation, standards and regulations need to be fundamentally reformed, to develop a system that better supports and provides greater control and influence to families and communities.”

A spokesperson for Manitoba Families told APTN Wednesday that the funding changes announced this week “build on Manitoba’s commitment to reform the child welfare system as outlined in the [report].”

The report does not discuss Treaty Rights, nor does it recommend returning to First Nations jurisdiction over their children.

It’s against this backdrop the AMC says Manitoba’s funding model change fails to account for what First Nations themselves say their children and families need.

“Sadly, with the Province of Manitoba’s announcement, they continue to ignore us.”

The AMC maintains that “the funding dollars for children in care should go straight to the First Nations so they may apply their own First Nations family laws to help keep our children with our families and within our Nations,” said Hudson.