Standing over a hot stove, Sam Saunders is taking great joy in doing something he’s done for his entire life – frying up smelts, freshly caught from the local Lake Melville, for dinner.

Traditional foods like smelts are more than a food source for the people of Labrador – it’s also community building.

People who call themselves Labrador Land Protectors have gathered to hold a “last supper” and feast on food they say will no long be safe to eat.

“It’s a symbolic last meal for our land protectors and let the people know that mercury is real and its dangerous,” said Saunders.

(Sam Saunders is at the stove cooking his smelts. Photo: Angel Moore/APTN)

Duck, smelts, salmon and cod were harvested for the feast.

And it’s food people here fear will be poisoned by methylmercury, now that the province of Newfoundland and Labrador has started flooding the reservoir that will feed the Muskrat Falls hydroelectric project 30 kilometres up river.

“If we want to go and fish, if we want to hunt, if we want to gather, it’s going to be a huge concern because of the poisons that are being poured into our water our environment everything its basically it’s the destruction of a way of life,” she said. 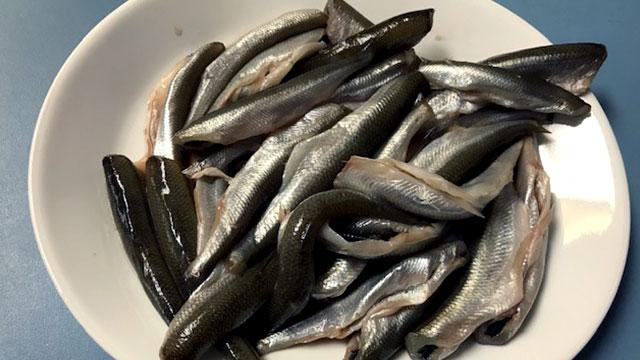 Mercury is a naturally occurring element that develops in the mosses and plants around Muskrat Falls and up and down the Churchill River.

Disturb it by mixing it with water, it becomes methylmercury – a neuro-toxin that builds up in the bodies of humans, animals and fish.

That’s why the land protectors have been against the Muskrat Falls project since it started.

“We just want to let everybody know that you know we are not happy with what’s happening with the muskrat falls project due to the methylmercury poisoning that will be directed onto our food chain,” said Saunders McLean.

Muskrat Falls is being built by Nalcor, a provincially owned corporation.

The project’s original cost of $3.9 billion has ballooned to more than $12 billion.

And structural safety, and environmental risks has plagued the project from the beginning.

Because of a public outcry over costs, a provincial inquiry is investigating the project.

The land protectors have taken on the role of protecting the water and land. 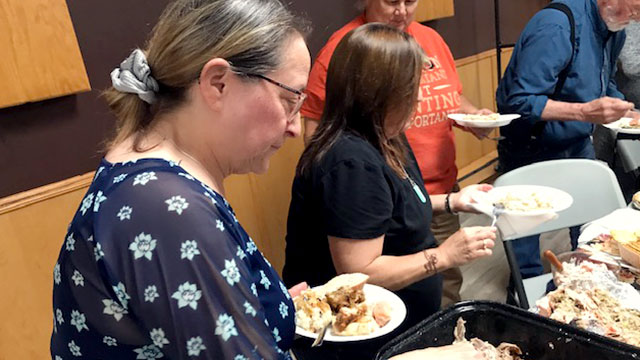 Erin Saunders has been part of the resistance.

She hunts seal, fishes salmon, and gathers medicines off the land.

“There’s no evacuation plan, they didn’t honor the methylmercury agreements, they didn’t clear all the vegetation from the reservoir, they didn’t do anything like that, it’s scary and it’s upsetting,” said Saunders.

Saunders said her culture will be lost.

“It’s sad what the Newfoundland government is doing to us it’s prejudice, it’s racism,” she said.

“They just come in here and strip our resources away you know give nothing back.”

Saunders joins a sharing circle after the feast.

They talk about their past battles and the stress the community is facing.

“I mean go back to the days of residential schools when they made students speak English and not their own language the food is basically the same type of thing to a culture,” said Roberta Benefiel.

The flooding of the reservoir is expected to wrap up in September.

On Thursday the land protectors here are planning to attend the provincial inquiry looking into the financial aspect of the project.