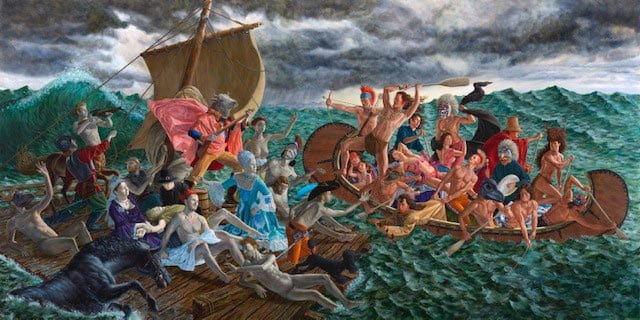 A new painting by artist Kent Monkman is now part of the permanent collection of the Art Gallery of Nova Scotia.

Monkman uses historic pieces and his paintings to tell a story, the story of the colonization of Indigenous people.

The paintings are graphic and beautiful and can make people feel uncomfortable.

His collection Shame and Prejudice: A Story of Resilience, is on tour across Canada and is currently in Halifax. 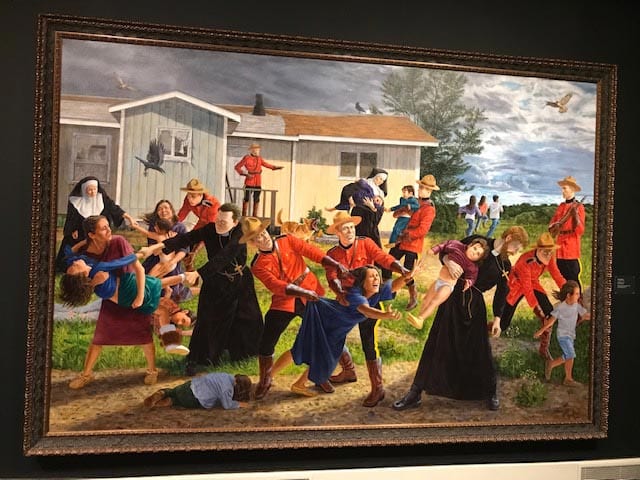 Monkman gave APTN News a tour of the new installation and says that he wants people to learn the real history and experiences that Indigenous people have lived and continue to live.

“I am integrating art, history with life,” he says. “It has always been separated. Configuring old works with contemporary perspective, have a dialogue and go across cultures. European histories folded into Indigenous systems.”

The exhibition takes you through colonialism, and it is told through nine chapters of the Story of Resilience.

The first chapter is New France, Reign of the Beaver and last the last chapter, Urban Rez.

As you enter , it’s more than paintings that line the walls.

What you see is interesting, and different from a traditional art gallery.

New France is a long dinner table that is set with china, crystal and silverware, along with fancy appetizers and champagne. Dining is lavish. Indigenous people were partners in the economy and in society.

As you proceed along the table, food and wine become scarce – colonization has begun. The dishes have the emblem of the Canadian National Railroad, and the Hudson’s Bay.

At the end of the table there is no cutlery or glasses, bones are scattered across the plates. Monkman says that this is the period of disposition and starvation because of the death of the buffalo.

Monkman says that continues to this day.

“The recent supreme court ruling again is another example of the policies of colonial government to deny, to remove, to dispossess us. So, this kind of work that I do that a lot of artists do, activist, it’s not over, never will be over.” 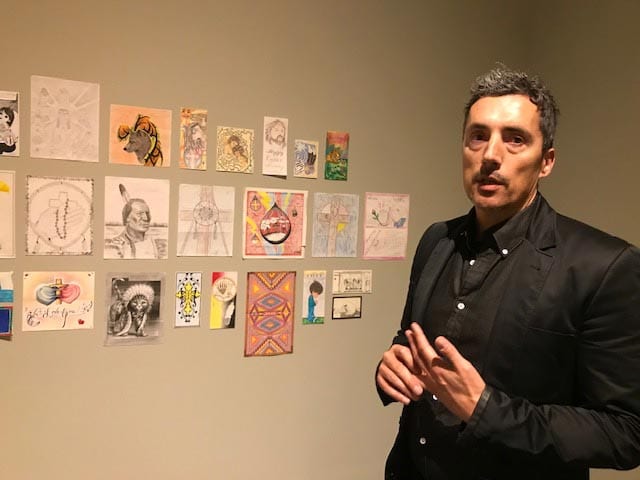 It’s his own story too. Monkman is Cree. He grew up in Winnipeg, and his community is Fisher River.

He says the impacts of residential schools, the removal of children, prison systems, living on reserves and the loss of language have not been truthfully told.

“It’s our story and it’s been largely kept from Canadians deliberately obviously, so I wanted to bring a perspective that, an indigenous perspective,” he says.

Monkman says it can be traumatizing for people but, “It comes with an acknowledgment to the greater public that these are, you know people read about them as facts, they don’t really think about them as emotional experiences.”

Art crosses language, culture and history. Monkman says the point is to disturb traditional thinking and bring in an Indigenous perspective.

“Part of the healing is acknowledgment and I think that’s important for Canadians to have that knowledge so that when we move forward together.”

Monkman says people always ask him what can they do, he challenges them.

“You’re a Canadian, you have voting power, do something with that, why are you fighting land claims? Why is your country’s politicians spending millions, hundreds of millions of dollars fighting indigenous land claims when the land is ours?”

Shame and Prejudice: A Story of Resilience is in Halifax till December 16, 2018, and then travels to four more cities across Canada. 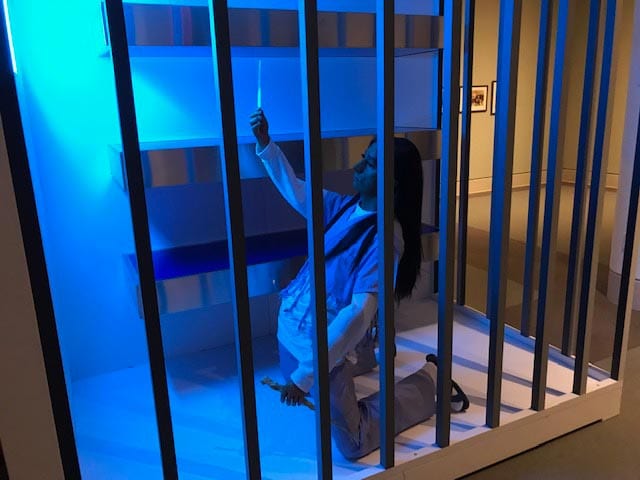 His next series of paintings called the Madhouse will convey the psychological impact of colonization through images of prisons, residential schools and foster care systems.

“These traumas have affected our health, our mental health, spiritual health and that was what I was trying to articulate with an image.”