Kateri Deer didn’t have children’s books written in Kanien’kéha – the Mohawk language – when she was growing up in the 1940s.

“When we were going to school, we weren’t allowed to talk our language. If you spoke it… you got scolded,” Deer explained.

Now, in 2020, Deer’s name appears in the dedication section of Takwa’áhson – a Mohawk translation of Itsy Bitsy Spider – one of three books recently published for children in Kahnawà:ke and beyond, thanks to a local publishing start-up.

By releasing the cannon of books – ‘Takwa’áhson,’ ‘Otsisto Otsisto Teiohswáthe,’ (Twinkle Twinkle Little Star) and ‘Akerákwa’ (You are my Sunshine) – Front Porch Publishing is equipping parents to properly teach Kanien’kéha as a first language to a new generation of children.

“This is the result of two years of hard work, and I can’t tell you how proud we are,” Charleen Schurman, one of the project’s coordinators, told APTN News during a launch event over the weekend.

As the story goes, Schurman and her friend, Jody Jacobs, were sitting on their front porch in Kahnawà:ke just talking about the lack of “finger-friendly” first-language books for children under two when the idea struck.

“Jody has two little grandchildren who go to the Language Nest, and two others who are going to be learning how to read soon,” Schurman, one of the brains behind Front Porch Publishing, explained.

“She wanted to have board books in Kanien’kéha that they could hold – where they wouldn’t have their fingers cut or harmed.” 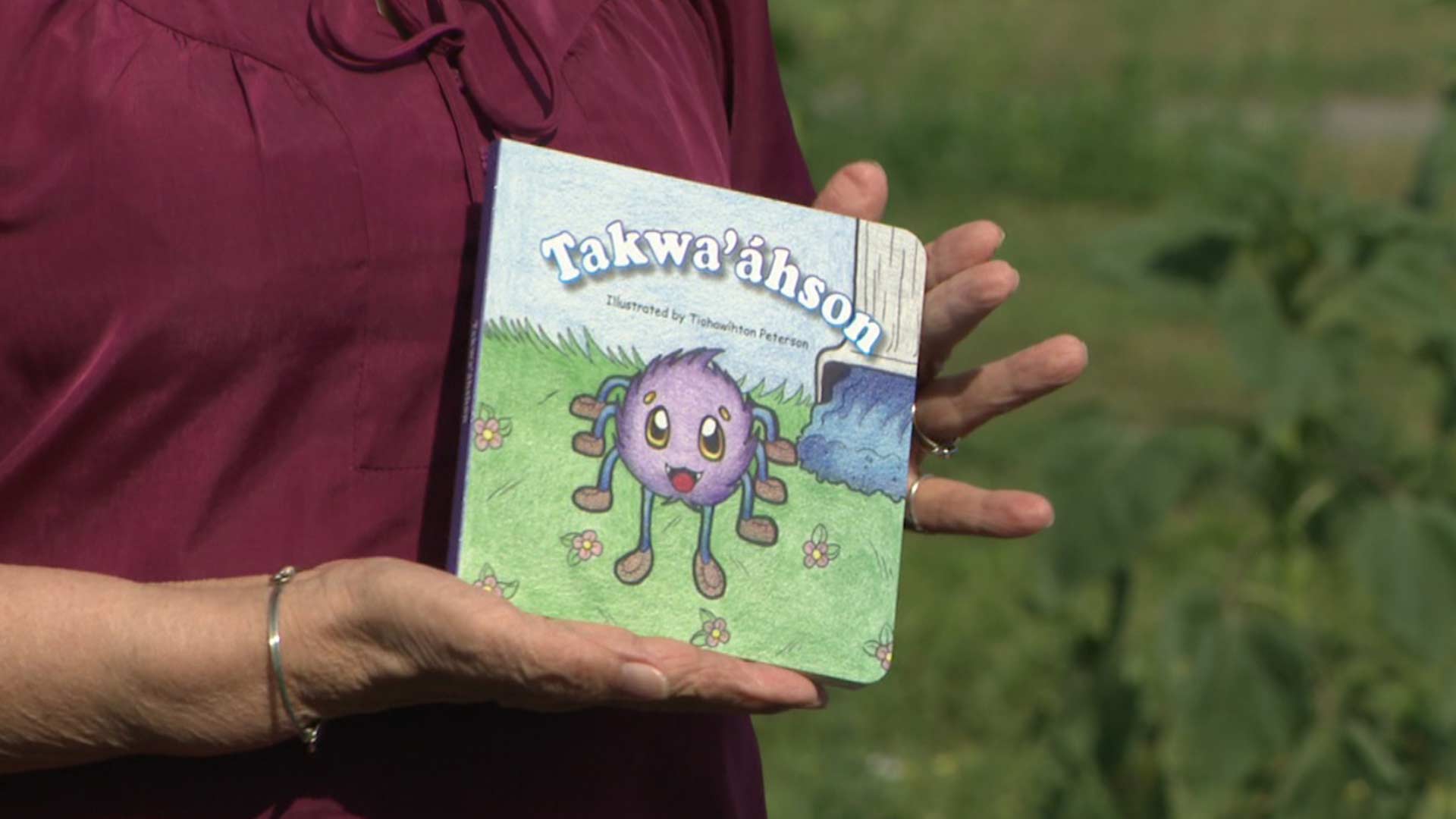 With less than 3,500 speakers left, Mohawk is considered an endangered or threatened’ language.

While research shows that language skills are best imparted before a child turns three years old, the selection of Kanien’kéha reading material for children is sparse.

Each of the new board books is dedicated to a local first language speaker who “passionately contributes” to Mohawk language revitalization.

For example, Jacobs became teary-eyed while dedicating “Otsisto Otsisto” to Tiorahkwathe Gilbert – a former childhood teacher known throughout the Iroquois Confederacy for his proficiency.

“I just thought that my grandchildren should learn that way as well,” she added.

A total of 3,000 board books were published after Schurman and Jacobs rallied an extensive volunteer team, including translators and illustrators.

Over the weekend, they were distributed for free to parents of children under two-years-old, but will later be sold to raise funds for the Iakwahwatsiratátie Language Nest – a much-needed Kanien’kéha immersion space for caregivers and children under four years old.

The Language Nest has already published three videos on Facebook – each corresponding to its own board book – to teach parents the proper pronunciation of words and phrases used. They hope to produce more.

According to Ieronhienhá:wi Tatum McComber, Kanien’kéha nursery rhymes were taught as part of an oral tradition, but were never committed to writing or published in the way they are now, thanks to this initiative.

With only a 12-letter alphabet to work with, the translation process can be lengthy at times.

“It takes a lot of people to be part of that translating, because you have first language speakers who don’t have the orthography to do the writing, but they have the speaking,” McComber explained.

“You have to get the tune in mind – and our words are so much longer than English – so we have to make the words fit into a tune that is sung with English words,” she said. “So that’s a process in itself.”

Even with access to immersion school or programs, children learning to speak Mohawk will likely have trouble retaining complex words and phrases without practice.

Despite the external pressures of the time, Deer says her parents ensured Kanien’kéha remained alive and well at home when they returned from school at the end of the day.

“The first thing my mom said to us: ‘I don’t care what kind of language you talked today. In this house, we speak Mohawk. Because if I don’t understand what you’re saying, you ain’t getting what you want,’” Deer said, laughing.

Today’s parents, she says, have more tools – and opportunity – to foster an early love of Kanien’kéha in their children.

“In the olden days, it used to be that as soon as you got outside [of school] you spoke your language. Today, it’s the opposite – they get outside, they speak English,” Deer explained. “So we have to remind them: when you go outside, don’t forget to speak your own language as well.”

“But you have to have somebody to speak with.”