When Shekinah Sinclair decided to pursue a post-secondary education she didn’t think it would be in her home community – or that her parents would be joining her as well.

“I don’t think I could mentally handle being away from my family,” said Sinclair. “I’ve always been with my family so having this chance to take it with my parents it’s just awesome.”

Three years ago the Sinclairs applied to be part of a pilot program based in Fisher River Cree Nation and run through University College of the North.

Students complete a bachelor of arts then move onto a bachelor in education – all within five years.

It was Cynthia Sinclair, 44, who encouraged her daughter to apply.

“[My mom] played a key role in me going to school. If it wasn’t for her I don’t even want to imagine where I would be,” said Shekinah.

The importance of education was instilled in the 23-year-old prior to her entering post-secondary school. 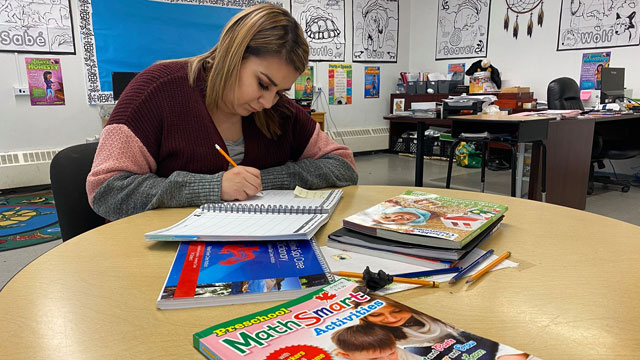 (“I’ve always been with my family so having this chance to take it with my parents it’s just awesome,” says Shekinah Sinclair. Photo: Brittany Hobson/APTN)

When Shekinah got pregnant with her first child her mother offered to stay at home to take care of her son while she completed high school.

After she graduated she went to work at the elementary school where both her mother and father worked.

To date, the family still works there full-time as educational assistants.

Cynthia always dreamed of teaching but starting a family with her high school sweetheart took precedence.

“When I was younger I wanted to become a teacher and it really wasn’t there for me to just pack up and leave with my family to pursue our education,” said Cynthia. “As soon as this program was offered to us on reserve we took it and didn’t want to wait.”

The closest university is in Winnipeg 200 kilometres south of Fisher River.

There is a community college that offers classes in Fisher River but this is the first time members don’t have to leave to earn a university degree.

Dwayne Sinclair, 46, said this has opened many doors for community members.

“Who does have that opportunity to go to school in their home community? [To] not have to move away, not have to relocate to get your education at home, that’s beautiful,” he said.

But it wasn’t easy at first.

The family had to learn to set boundaries. One of those being no group projects.

“In the beginning we did group work together and then we didn’t consider each other like classmates. We would always treat her like our daughter… we didn’t really consider her opinions,” said Cynthia.

As time went on both Cynthia and Dwayne realized they had to let go and treat their daughter like any other classmate.

However, they still lend a helping hand every now and then.

Like when they play the role of grandma and grandpa to Shekinah’s three children.

The young mother has quickly had to learn how to adapt to life as a student and mother.

But in the end she knows it’s worth it after her son Jeremiah told her he wanted to follow in her footsteps.

Cynthia and Dwayne have two other children and a total of five grandchildren.

Juggling work, school and parenthood can be a challenge for all three but Dwayne says this shouldn’t prevent anyone from pursuing their dreams.

“If we can do it then there’s other people out there that can do it as well. That it’s within their grasp. We had to make the decision to get up and get out there and to grab what was in front of us,” he said.

Both of the parents want to continuing working with kids at the elementary level once they are done school. Shekinah hopes to continue her education to possibly become a school counselor.