With each precise stitch, the women of Denendeh sew a story of culture and history into their hand-crafted garments.

The three hour fashion show was part of the Naka (northern lights) cultural celebration hosted by the Yellowknives Dene First Nation, the North Slave Metis Alliance and the City of Yellowknife.

(Alice Wifladt recalls her childhood on the land, picking flowers to dye embroidery thread with before beads were available in the Northwest Territories. Photo: Charlotte Morritt-Jacobs/APTN)

Alice Wifladt gave the opening prayer in her willideh language.

Born in 1949 on-the-land, Wifladt said she learned to sew with embroidery thread before beads were available in the north.

“Every household sewed, there were no houses just tents back then. People would go house to house sharing supplies. Sometimes you didn’t have stroud, you just have black cotton, or even duffle, anything would do even canvas.” Wifladt said.

Her siblings would go on the land to pick flowers to dye thread with.

She began sewing at six-years-old, but was forced to stop when she was sent to the Sacred Heart Mission School, a residential school run by the Roman Catholic Church, in Zhahti Koe – Fort Providence, N.W.T.

“I remember getting in the plane and the pilot telling us we were just going for a ride and would be right back. When I came home my mother said ‘What did they do to my daughter, she doesn’t understand no more.’ My auntie was translating. I had to relearn all over again, sewing stuff,” she said.

“But whatever I left for sewing, she kept till I came back.” 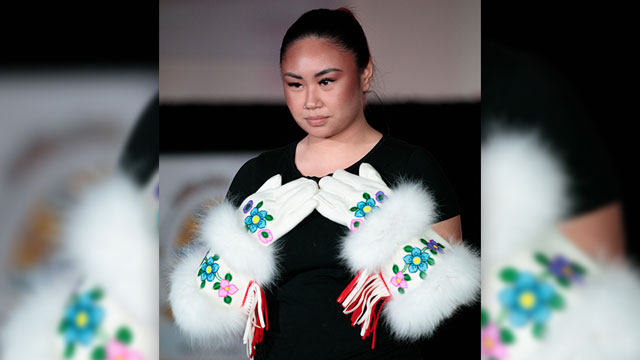 She never gave up on sewing and learned from her mistakes.

“I made my first wrap arounds for midnight mass Christmas. Everyone has new parkas, new mukluks, everything new for church. When you kneel down your heel, you are supposed to cut a piece and fold it. I forgot to and in the church, everyone behind me just giggling, supposed to be praying but oh well.” Wifladt said as she laughed.

According to the artist, the women around Yellowknife are best known for their fur mukluks, which currently sell for anywhere from $500 to  $700.

“We sold to the RCMP and other people. I use to help my mum sell it to the hospital to the nurses for $40. Now I think about it and shake my head,” she said. 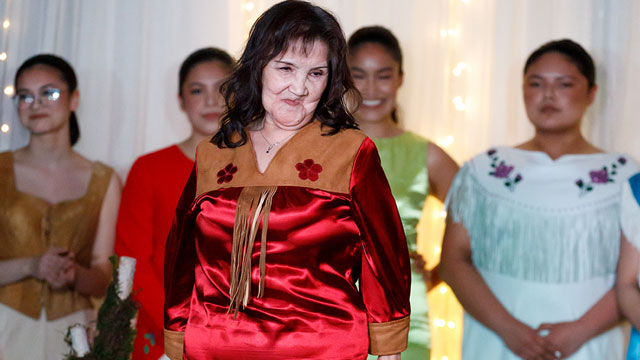 (Berna Beaulieu welcomes a round of appaulse for her formal wear collection. Photo courtesy: Christopher Alexander)

The Tłı̨chǫ seamstress, born in Behchokǫ̀, N.W.T. was nine-years-old when she first experimented with material her mum had ordered from Eaton’s.

“In the ‘50s there was peddle pusher pants, and I was determined I would show her I could sew. For my mum she made mukluks, mitts and jackets. My idea was to make clothes, so I cut out the material holding it against me. I sewed it by hand and tried it on, but it was so tight with no crease clipped I couldn’t move. As I tried to peel it off my mum and her friends came home and they were laughing their heads off,” Beaulieu said.

Her self-taught sewing landed her a contract with the N.W.T. Joint Task Force to design uniforms. But when asked whether she went to school for design, Beaulieau decided then and there that she wanted to gain a formal education.

She returned back to school to receive her business administration, computerized accounting diploma from Alberta Career Computer Center in Edmonton.

But Beaulieu had to persevere prejudice in school.

“When I first went to the school in Saskatoon I was told ‘they’ve had three native students before and they never made it.’ I said ‘you never tried me!’ My determination is so overwhelming I really want this so badly. He [program director] asked me, ‘if you can go out there and find a sponsor I will take you in.’ So that afternoon I had native women to sponsor me,” she said.

By the end of that first year, she was already commissioned to design a wedding dress for a bride in Kugluktuk, Nunavut who she had never met.

While their were rules in place that prohibited the sale of goods so early on in the program, the customer was willing to wait two years for the perfect custom dress.

“For me, it is their open big day for them. For me to be designing that I feel proud and very privileged. Just knowing my designs are going out there is almost overwhelming, and when I see all the outfits in church that’s when I feel like crying. It really shocks me that I did everything all at once,” Beaulieu said.

Even with international success in Germany, she has always refrained from comparing herself to others.

“My biggest challenge is I don’t like competing with anyone. I know there are other designers but they have their own stuff. I know mine is unique, I can feel it. I challenge myself which is all I can do,” she said. 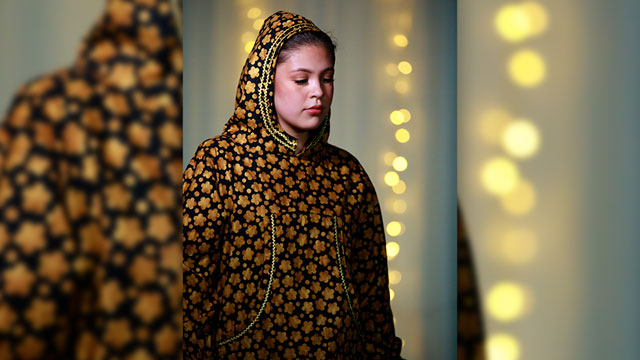 Sharon Firth wowed audiences on the catwalk when she debuted her collection to the public for the very first time.

Her traditional Delta region parka covered with wolverine trim reflects her life in the bush as she helped with her parent’s trap line in Aklavik, N.W.T.

“Fur is our bread and butter, our grandparents and parents, that’s how they grew up so I am just following in their footsteps,” Firth said. 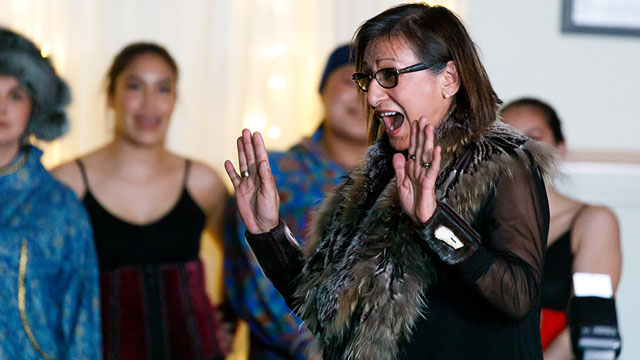 The four time Gwich’in Olympian has embraced fashions from Norway, Italy, New York City and more and blends beautiful material picked up from her travels.

“The covers for example, that’s my childhood. That’s what I saw my mum and aunts from Aklavik and (Fort) McPherson wearing. They were such beautiful sewers and designers themselves. I try to have that mental picture when I saw. I know they gave their best so I try to give my best. That’s what they gave me,” she said.

While she grew up learning to bead and sew from her mum, it wasn’t her twin sister, Shirley Firth passed away in 2013 that she used sewing to heal.

“I thought about my childhood and residential school. We weren’t allowed to wear our own traditional clothing, we were shamed. I am use to representing my people and giving my best. I thought with the places I have been around the world there is beautiful material I could sew,” Firth said.

With every stitch brings a little more satisfaction as Firth transitions into her creative pursuits.

“I put them on my Facebook and if people like them that works. Even to just show I was a completive athlete for 20 years, I worked at my job for twenty years and now hopefully with sewing it will be another 20 years. So I go crazy. There is no balance in my life I just do it because it brings me a lot of joy,” Firth said.

From mukluks to baby belts to mittens, each garment tells a northern story, made with pride and love.