A man in Montana First Nation can barely walk after being attacked by a pack of dogs.

Henry Rabbit needed 50 staples to close a wound in his leg after the attack.

“I fought off as best as I could. I swung, I fell and landed on one knee and that is where they attacked me,” he said.

(Rabbit is still recovering from the attack. Photo: Chris Stewart/APTN)

Rabbit said he was out for a walk on Aug 31 when a group of dogs approached him and attacked.

He said he’s not the only this has happened to.

“Before me, there were two others who were bitten before me,” he said. “We thought someone would do something. No. Still no bylaws or anything, which we should have by now.”

He said he’s waiting to hear back from leadership on what they plan to do about the problem.

Rabbit is worried that other people will be attacked.

“I was lucky to have a vehicle come by and I jumped in that vehicle right away. They took me to a friend’s house and that’s where they helped make me feel better. They took care of my wound. They made sure I wasn’t bleeding much,” he said.

“All the first aid procedures they did.” 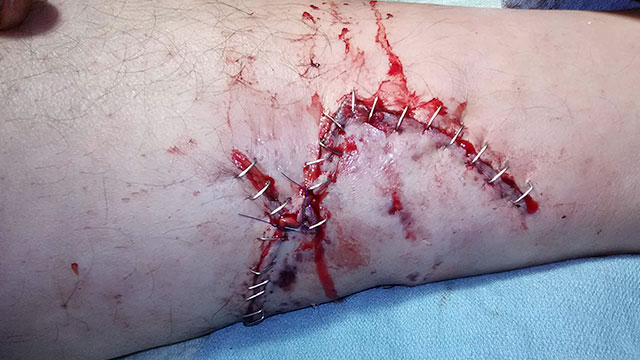 APTN News asked Montana band leaders about dock attacks but no one has responded.

Rabbit hopes that no one else gets hurt.

“I’m just worried that a kid will get attacked or an elder because they can’t defend themselves,” he said.

1 thought on “‘I was lucky’: Montana First Nation man attacked by pack of dogs”

Death toll continues to rise in Brazil as president withho...