That’s how long 16-year-old Devon Freeman was missing before his body was found in April 2018 hanging from a tree just 35 metres from the Hamilton treatment centre where he was living.

Now, the teen’s grandmother, First Nation and supporters are calling for a coroner’s inquest to find out how such a thing could happen.

Details about Freeman’s mental health and behavioral challenges are documented in a Dec. 5, 2019 letter to Karen Schiff of the Regional Supervising Coroner’s Office from lawyers Sarah Clarke and Justin Safayeni, who are representing Chippewas of Georgina Island First Nation and Pamela Freeman, Devon’s grandmother.

Asking for the inquest, Clarke and Safayeni call the “lack of communication and the multiple system failures” between organizations involved in Devon’s care “almost unimaginable,” adding “it is the overarching and consistent theme reflected at nearly every stage of the tragic circumstances leading to and surrounding Devon’s death.”

For Pamela Freeman, the search for answers about Devon began long before he went missing.

“I know I read and read so many books and I used to say, ‘You’re in here Devon. I’m going to find you, I have to,” Freeman said of her determination to understand her grandson’s behavioural and mental health challenges when he was young.

Pamela became Devon’s primary caregiver after his mother passed when he was just six. Early on, it was apparent to her that he was having trouble processing his loss. Devon showed signs of complex inner turmoil.

“His was complicated, his was complicated along with grief. He didn’t tell me, but he told a teacher that he was worried he was forgetting his mom. For the first three years, he didn’t cry,” Freeman said. “It was almost like I had to keep reading him books to say, this is what’s happened and it’s okay to cry. It’s okay for boys to cry if they miss their mom.”

Pamela said Devon would sit on the stairs shortly after his mother had died, watching her. She said, “He’d say, ‘Nana, do you miss your daughter?’ and I’d call him over and I’d give him a big hug and I’d say, ‘I miss your mom’.”

As he got older, Devon received treatment from a psychiatrist and multiple mental health diagnoses including Oppositional Defiant Disorder, or ODD. The outbursts associated with ODD were exceptionally challenging and of great concern for both Devon and Freeman herself, she said.

“He used to call it his volcanoes and he hated it. He would cry after, like just bawl and if he broke something he would say sorry. Even one of his teachers said, ‘He doesn’t like, he doesn’t like it and he can’t figure out how to stop it,’” Freeman said. Devon’s outbursts sometimes happened at school and he would be sent to the office. Freeman says Devon would just be sitting there crying, saying, “I don’t want to be like this.”

After years of seeking treatment for her grandson, the letter states that Pamela Freeman consented to making Devon a Crown Ward of the Hamilton Children’s Aid Society in June 2017. At that time, it notes he was in a residential program at the Lynwood-Charlton Centre’s Flamborough site.

According to their website, the residential program is described as being “available to youth who are experiencing emotional, social and behavioural difficulties as well as other mental health concerns,  which are of an intensity and frequency that a less intrusive level is believed to not be of sufficient benefit to the youth and family at that time.”

Devon frequently left the program without permission and in May 2017, Devon had disclosed a suicide attempt by hanging from a tree to a worker there, the letter states. 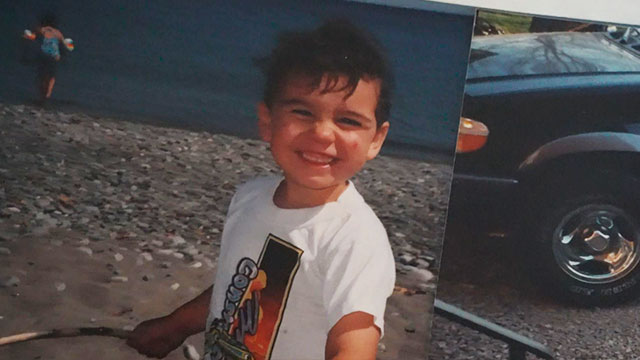 (Devon took the death of his mother hard. ‘It’s okay for boys to cry if they miss their mom,’ his grandmother Pamela would tell him)

Freeman said Devon did not seem happy at the Lynwood-Charlton Centre. On Sept. 30, 2017 the family gathered to acknowledge the 10-year anniversary of his mother’s death. Devon appeared to have lost an alarming amount of weight, Freeman said. It was the last time she ever saw him alive.

According to a media release sent out by Hamilton Police Service, Devon was last seen or heard from on October 6, 2017. He was reported missing on October 8, 2017.

“Nobody told Pamela, the First Nation or HPS (Hamilton Police Service) that Devon had tried to hang himself,” Clarke and Safayeni state in the letter. According to them, that omission could have contributed to HPS’s “view that Devon was just a ‘runaway’, rather than a child at serious risk of self-harm and with a history of attempting suicide by hanging.”

No one knows whether the exterior grounds at Lynwood were ever searched by police or Lynwood staff, and tragically, no one knows exactly when Devon died.

“We have a collective opportunity to shine a light on his life and death, to examine the many cracks in the system that allowed him to die and to ensure that those cracks are sealed so that another child does not slip through again,” the letter to the Coroner states.

The Assembly of First Nations, Cindy Blackstock and the First Nations Caring Society, the Ontario Federation of Indigenous Friendship Centres, the Anishinabek Nation and Dnaagdawenmag Binnoojiiyag Child and Family Services are all backing the Chippewas of Georgina Island First Nation and Pamela in their request.

On Tuesday, Hamilton Police Chief Eric Girt sent a letter to Schiff supporting the call for an inquest.

On Friday, Lynwood-Charlton Centre Executive Director Alex Thomson told APTN News in an emailed statement that he could not comment on Devon’s case, but that the centre “will fully participate in a Coroner’s inquest should one be called.” Thomson said the centre is working with its service partners “in improving our capacity to better serve youth with complex needs, including suicidal ideation.”

A statement from Ontario’s Ministry of Children, Community and Social Services said the department couldn’t comment on individual cases for privacy reasons, but said, “the death or injury of any child or youth is a tragedy. Our hearts go out to the family and community.”

Shone did say that the children’s aid society would “fully cooperate with the process if an inquest was called.

“Hamilton CAS acts in accordance with the Child, Youth and Family Services Act, which includes requirements for consultation with bands and First Nations, Inuit or Métis communities. We are committed to the journey of truth and reconciliation and building our relationships with Indigenous communities in order to improve our supports and services in collaboration.”

As Pamela reflects on the ongoing struggle to find answers about her grandson, she believes Devon himself can help her.

“You never really lose somebody as long as you keep thinking about them. And he knows I need him,” she said.

“Now he doesn’t have any of those troubles anymore, so he can concentrate on giving me courage and strength.”