Taalgyaa’adad (Betty Richardson) had no idea that she would ever be celebrating an honorary degree when she joined the Skidegate Haida Immersion Program (SHIP) two decades ago.

“Never, never in my wildest dreams did I think anything like this would ever happen,” said Taalgyaa’adad.

“But here we are, we’ve got our Doctorate and it’s wonderful, it’s just heartwarming.”

Taalgyaa’adad is one of nine Haida Elders who received an Honorary Doctor of Laws Degree from Vancouver Island University (VIU) for recording and revitalizing the Skidegate dialect of Haida’s oral language. 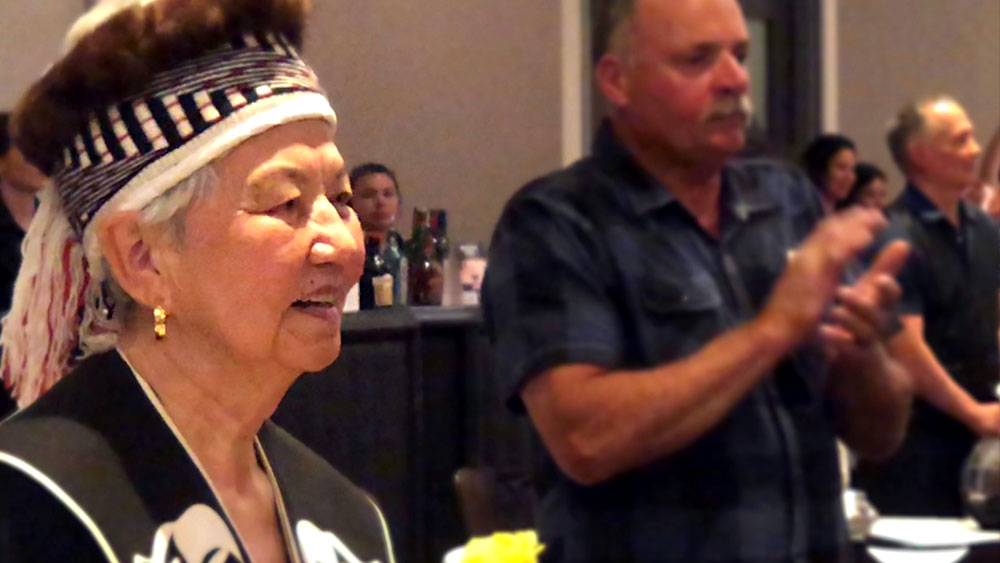 (Taalgyaa’adad at the ceremony at the Vancouver Island University. Photo: Laurie Hamelin/APTN)

Since the group began 21 years ago, it’s translated and produced hundreds of CD Roms, developed an app with thousands of words, wrote a glossary and many children’s books.

“It’s the most important thing in the world for our language to be preserved because it means it’s preserving us as people,” said Taalgyaa’adad.

“We’re preserving our language and carrying it on to the next generation.”

Taalgyaa’adad joined SHIP in 2000 after her husband passed away.

The group met five days a week, ten months a year and Taalgyaa’adad says it gave her a purpose.

“It’s given me the will to wake up every morning,” said Taalgyaa’adad.

“I can’t die today I have to go to school,” she says while laughing.

The Elders lived through Residential school and were forbidden to practice their culture and speak their own language.

Learning or holding onto their traditional language wasn’t easy.

“Fortunately we lived with our grandmother until I was 13 years old and my grandmother spoke fluent Haida, in fact she spoke very broken English,” said Taalgyaa’adad.

“And I had an Aunt who also lived with us who spoke fluent Haida so the two of them speaking back and forth to one another is where I learned.”

The Elders’ family members and Haida political leaders attended the Convocation in Nanaimo B.C. on June 3.

Everyone packed the ballroom of the Coast Bastion Hotel after the ceremony to celebrate with dinner and speeches.

“Language is who we are, language is how we articulate and express our world view,” said Kilslay Kaji Sting.

“Our story as a nation is an ancient one, we’ve been in our homelands for thousands of years, for hundreds of generations and thrived and developed a culture as good as any on this earth throughout all of history,” she said. “And right now it’s fighting against this colonial narrative that puts us less than the other people, less than general society, not even being human enough to have rights. 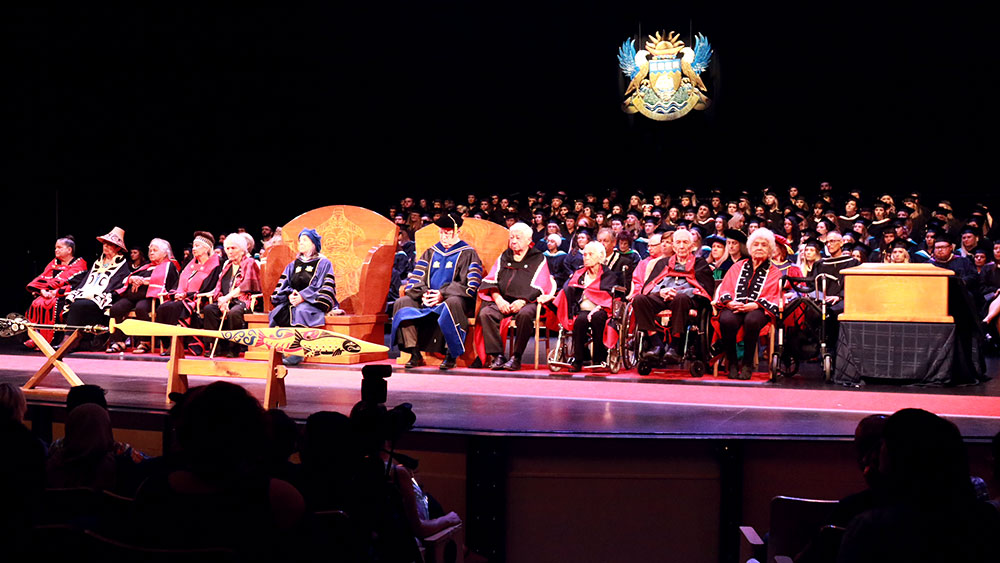 Kilslay Kaji Sting is proud of his mother’s hard work and wants to see his entire community speak Haida again – like it was before colonization.

“I want it to be functional in Haida business and I want to be able to go to a Haida feast and talk in Haida and talk to other people in Haida,” said Kilslay Kaji Sting.

“I’m one generation removed from that.  My mom and dad could do that, I’m the first one that couldn’t.

“Well we’re changing that, by the time I check out it will be changed.”

Chancellor Louis Mandell from Vancouver Island University says it is fitting that SHIP be recognized during the United Nations Year of Indigenous Languages.

“This year we seek healing, from the violent disruption and interruption of language transmission and recovery of humanity’s linguistic heritage.

“Indigenous languages are disappearing around the world at unprecedented rates, with Canada one of the worst examples.”

“We are overwhelmed with admiration and inspiration, and celebrate SHIP’s love and lasting legacy.”

Now that the Elders have reached such remarkable success, it doesn’t mean the project is finished says Taalgyaa’adad.

“A lot of the times I wake up in the middle of the night thinking about a word and I’ve got a pen and paper by my bed and I’ll write the word down that has come to me.”

“I’ve known it, but it’s been sort of hidden in the back of my mind.”

“Words are added every day, in fact words are being added today as we speak.”