Nearly three years after the federal government committed to ending Canada’s longest running water advisory, the Neskantaga First Nation in Ontario is once again moving back to bottled water.

During a media tour of the community, Chief Wayne Moonias said that all government hired contractors were fired.

“We are here to announce effectively immediately Kingdom Construction Ltd has been directed to seize all operations in Neskantaga First Nation with respect to the water treatment plant upgrade project,” Moonias told reporters.

Neskantaga, a fly in community 430 kilometres northeast of Thunder Bay, has been under a boil water advisory since 1995.

After being elected in Oct. 2015, the Liberals promised to get the community off the water advisory.

But things haven’t turned out the way the community expected.

Frustrated with long delays, Neskantaga said it’s moving ahead with plans of its own.

Moonias said the 300 people in the community are fed up waiting for clean, safe drinking water.

“We are entering into the 25th year of this boil water advisory and this has been a longstanding issue that the community has suffered,” he said.

“May 30, 2018 was the date that the people of Neskantaga expected to have clean drinking water,” Moonias said.

“And as of today, we are about eight and a half months behind schedule.”

Moonias would not talk about why the construction company was behind schedule.

He said any questions about the company should be directed to the community’s lawyer.

APTN News contacted Erikson Law in Thunder Bay but calls were not returned at the time of publishing. 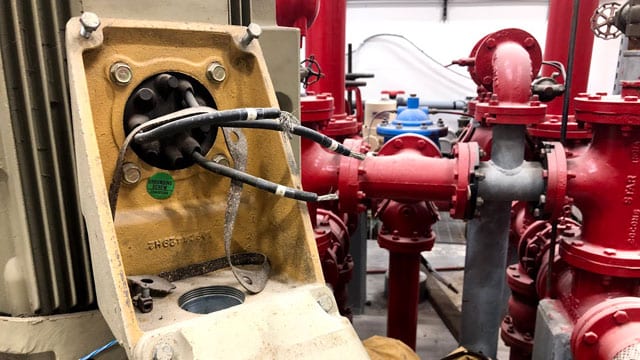 But a tour of the treatment plant provided come clues.

Disconnected power supplies, no working furnace, and an incomplete staff bathroom are among some of the unfinished business.

People in the community must use a reverse osmosis station for clean water. 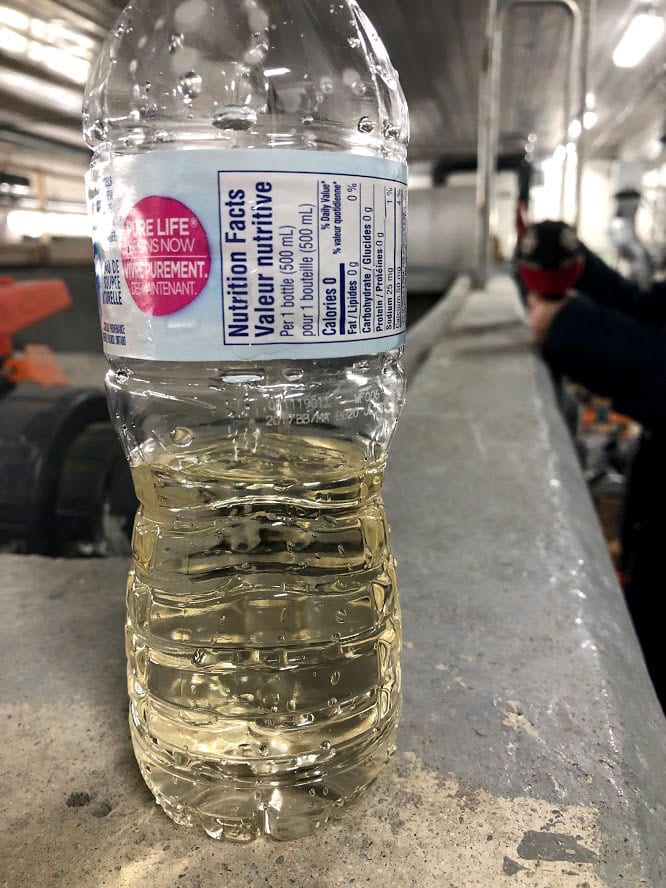 (A sample of the water that comes out of the current Neskantaga water system. Photo: Willow Fiddler/APTN)

They fill up jugs to haul back to their homes.

This was supposed to be a temporary fix when the system was installed nine years ago.

“This is a prime example of what each community member goes through on a daily basis just to provide drinking, potable water for themselves, for their kids,” said Moonias.

There’s a reverse osmosis unit at the school as well – and it’s often empty by the afternoon. 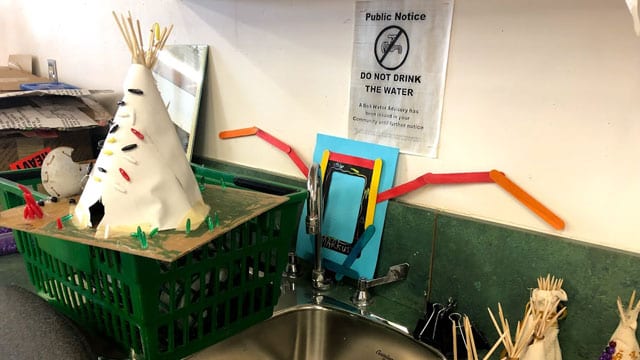 The children at the school have lived their entire lives under the boil water advisory.

Neskantaga’s health director says she’s seen how it effects people in the community.

“It’s stressful, you know,” says Sharon Sakanee. “Especially somebody that doesn’t have a vehicle to be getting water daily to get for your cooking or bathing or whatever you know, drinking water.”

Moonias said Indigenous Services needs to work with them to get a new contractor who will complete the project.

He’s calling for a shutdown of the reverse osmosis system – and a return to bottled water to all homes instead.

According to Indigenous Services Canada, government officials are aware of the situation and are reviewing a “detailed action plan” that was provided by the community.

“Our government is firmly committed to working with the community to complete work on their water infrastructure and bring clean drinking water to the people of Neskantaga,” said a statement from the office of Seamus O’Regan, minister of Indigenous Services.

“Indigenous Services Canada officials are currently engaged with the community to determine the present status of the project and confirm the path forward.”

Kingdom Construction based in Ayr, Ont., said it didn’t know what was happening – but that the company would be issuing a formal statement in the next week or so.