For more than 40 years, community members in the Pimicikamak Cree Nation in Manitoba have gathered nightly for the game of bingo – that streak was put on hold Thursday night.

Instead, they gathered to watch Brady Keeper, one of their sons, take to the ice in Ottawa and make his NHL debut as a defenceman with the Florida Panthers.

“I’m so happy with all of the support I get back home, it’s really, really cool, I’m just really happy,” Keeper told APTN News after the game. “I guess they cancelled bingo and watched the game. That was pretty cool.”

Keeper signed with the Panthers last week after playing two seasons with the Maine Blackbears. 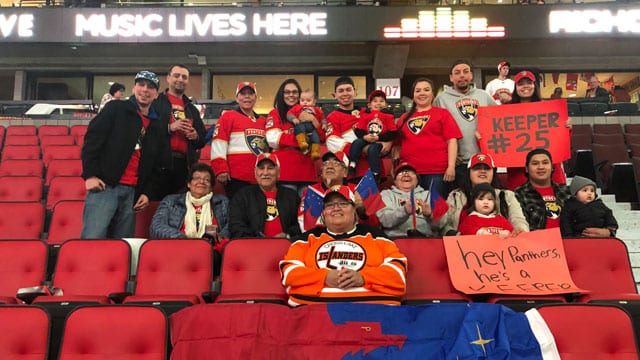 (Family and friends made the trip to Ottawa for Brady’s game. Photo: Amber Bernard/APTN)

In Ottawa, at a game dubbed reconciliation night by the hometown Senators, Keeper took part in the ceremonial puck drop.

“Obviously it’s special for me. I guess I’ve been dreaming about this my whole life,” he said.

Growing up, Keeper, 22, used to play hockey on a rink his father made out of garbage scraps.

Brady’s father Anthony Keeper, remembers he built a backyard rink for his kids with materials he found in a garbage dump – not knowing that it would ever lead to watching his son play in the big leagues.

“I did, just to keep them busy,” he says. “To get them where I guess I can see them all the time and it kept them busy.

“We didn’t know how far it would take them, we’re actually here now (Keeper’s first NHL game,) it’s so amazing.”

Brady Keeper talks fondly about his childhood and the opportunities his father helped to create for him.

“Me and my brother used to play in the background of our house. So it was really special for them… so all the props got to go to him (his Father.)”

Back at home, with no bingo on the schedule, people were ready to cheer Keeper on.

“So back home there’s a lot of people hyped up for this game – the NHL debut of Brady,” said Pimicikamak Councillor Ivan Monias who made the trip to Ottawa. 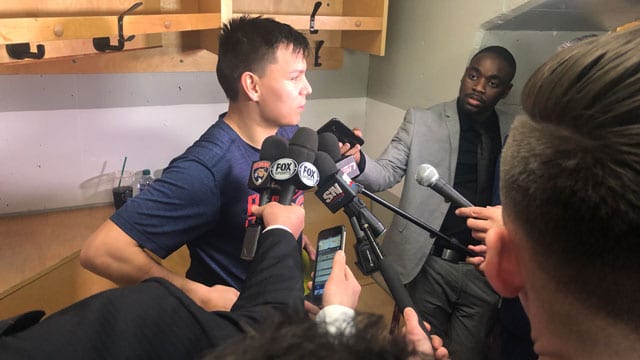 The young player wants to remind youth looking up to him to work hard and have fun.

“My dad used to tell me all the time that if you work hard and stay away from the wrong stuff…and have fun, you can do whatever you want in your life, and that’s what I’m doing right now,” he said.

Brady Keeper said he wants to get more time on the ice moving forward and wants to play in the next game with the Florida Panthers.

“Hopefully fly to Boston and join another game tomorrow.”

Keeper ended the game with one shot on goal, 12:40 of ice time and was named third star.

Florida’s next game is March 30 in Boston.