The Mount Polley mining disaster was one of the worst environmental disasters in Canadian history.

Though at fault, five years later the mining company responsible has still not faced any fines or charges.

Bev Sellars, then-chief of Xat’sull First Nation, says she feels helpless to do anything about the tragedy that has impacted her land and people forever.

Sellars recalls the day when 24 million cubic meters of mining waste spewed into waterways within her traditional territory.

“Companies come in, do their damage and are just allowed to walk away,” she said, “and that has to stop.”

A panel of experts found the company at fault due to an unstable foundation.

Last month marked the five-year anniversary of the tailings pond breach. It also marked the deadline for government to fine the company that operates the gold and copper mine, Imperial Metals.

Sellars said she isn’t holding her breath waiting for justice.

Sellars tried to file private charges in 2017, just days after the B.C. government announced charges would not be laid.

She claimed the mining company contravened the Environmental Management Act and Mines Act.

But after reviewing her case, the B.C. Prosecution Services did not approve the charges.

“The province of B.C. should have allowed me to go ahead with my private charges against Mount Polley, but they didn’t,” said Sellars.

In July APTN News visited the disaster area below the tailings pond at Hazeltine Creek.

What looks like a valley of destruction at first glance is actually the result of millions of dollars worth of reclamation work paid by Imperial Metals. 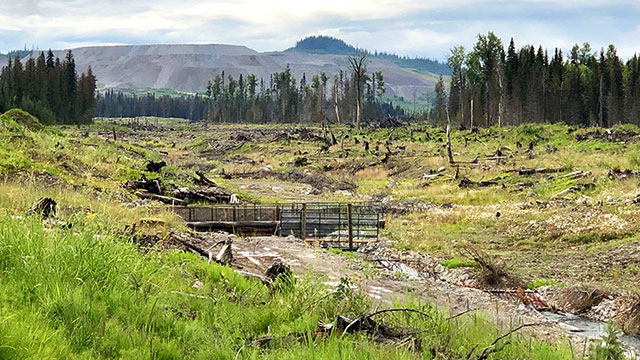 “People from the area who are familiar with the forestry industry and reforestation of cut blocks know that the trees do not grow back overnight, and that full recovery will take some time,” says C.D. ‘Lyn Anglin.

“This does not include the costs of the repair work on the tailings storage facility.”

“There should have been more done, there should be a long term plan put in place that tracks to see what the impact of the chemicals in the environmental system is and see if it’s affecting the fish and wildlife populations,” said Edzerza. 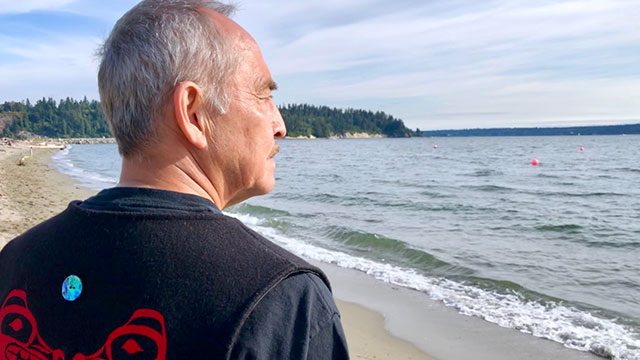 Allen Edzerza of the B.C. First Nations Energy and Mining Council says Imperial Metals hasn’t done enough to make up for the destruction it has caused to the area. Photo: Laurie Hamelin/APTN.

The same panel of experts that reviewed the Mount Polley breach also found that under current regulations the province can expect two tailings dam failures each decade.

Despite B.C.’s polluter-pays policy, mining companies don’t have to put up full cleaning costs as a deposit.

“What we have seen in the past is large companies, as the mine gets towards the last 10 years of its life, they like to sell out those projects and then take their reclamation deposit and they leave,” Edzerza explained, “and then you have a smaller company now operating these mines.”

In most instances, he continued, those companies don’t have the resources to do full restoration.

The B.C. First Nations Energy and Mining Council released a report in July urging the government to change its mining laws to protect taxpayers from footing the bill for future accidents.

Edzerza said other mining laws need updating, too, like B.C.s Free Entry Mining System, which he said violates the principle of free, prior and informed consent, which is protected under the United Nations Declaration on the Rights of Indigenous Peoples.

“Right now you can stake on-line from anywhere in the world,” said Edzerza.

“You don’t even have to come to British Columbia. You don’t have to know what nation’s territory you are in, you don’t have to know the law,” he continued. “You just need to get this certificate, stake a claim and by law the province has to register it. Once a claim is registered the miner has an interest in that land which could be infringing Aboriginal title and rights.”

To prove how easy it is to stake a claim, in 2017 Sellars did just that on the Former Mining Minister Bill Bennett’s home property. 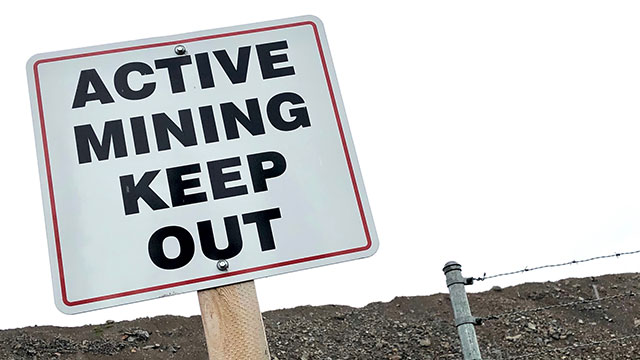 She was the chair of the group First Nations Women Advocating Responsible Mining at the time.

Sellars said it cost her less than $200 to stake the claim.

She said the policy is outdated and has been around since the gold rush.

“It’s still the same — it hasn’t changed and it has to change,” she said.

“People come in and they disregard Indigenous territories. They have no right to claim our land.”

In a statement to APTN News, the B.C. government confirmed it is working on a reclamation security policy. It says it has also begun pre-engagement on a review of the Mineral Tenure Act and will continue to work with Indigenous nations and the First Nations Energy and Mining Council.

Sellars is hopeful, but said she won’t believe it until she’s see it.

“They have no choice but to change things. It’s an absolute requirement.”