The Nova Scotia courts took a step towards reconciliation Thursday as Indigenous people attending court now have the option to take legal affirmation with a sacred eagle feather.

Sacred feathers were presented to the court by members of the Mi’kmaq community at a ceremony that was attended by chiefs, Elders  and Nova Scotia chief justices.

Chief Leroy Denny of Eskasoni First Nation said it is a good step to reconciliation, inclusion, and to practice ceremony besides the bible.

“Sometimes the power of the feather, they know our creator doesn’t judge them, and it helps them from the start. It helps them tell their truth,” said Denny.

The feather can be held or placed in front of a person while testifying. They are also allowed to bring their own feather with them.

Chief Rod Googoo of Waycobah First Nation said he is glad the courts are incorporating Mi’kmaq beliefs and teachings.

“Now we don’t feel like we are isolated, intimidated. Now our people will feel a sense of belonging, not an outsider coming in,” said Googoo.

Nova Scotia Chief Justice Michael MacDonald said the colonial system has problems and it’s time to look at the Mi’kmaq approach to justice.

“They have a strong sense of community, respect for elders, and a restorative justice approach that we can learn from,” said MacDonald.

The implementation of the eagle feather is part of the process of the Nova Scotia courts to be more inclusive and relevant to the Indigenous community.

“It is a proud day to bring the sacred eagle feather for people to come to court and tell their truth,” said MacDonald.

The sacred eagle feathers were on display at the ceremony, in custom holders made by Elder Lorraine Whitman of Glooscap First Nation.

“I did not expect to make 33 eagle feather holders for the courts of Nova Scotia,” said Whitman. 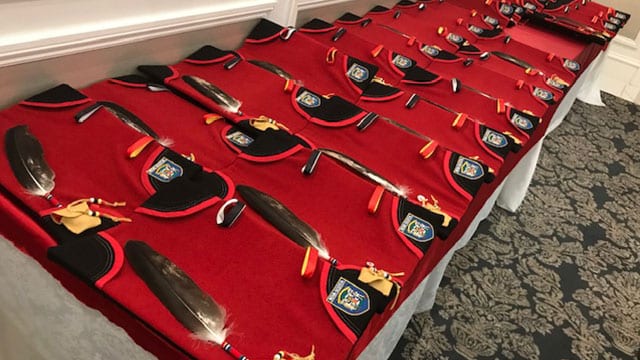 The handmade holders represent justice, people, and tradition. They are designed to keep the feathers protected.

“The colors represent the robes of the judge and the justice, the ribbons represent all people, yellow, black, red and white, so anyone can use it,” said Whitman.

Each holder has a tiny pouch with sacred medicines and representations of all the elements; earth, water, fire, and air.

Chief Deborah Robinson of Acadia First Nation said the feather is a reassurance of fairness and recognition of culture and the deep spiritual connection.

“When you can experience that within a courtroom under even the most stressful times, when you need that reassurance, it brings comfort and a sense of calmness and acceptance,” said Robinson.

The feathers will be kept in a locked secure area at night and weekends and are made available to the courtrooms during the day, upon request.

The feather is available to anyone who is appearing before the court.