“Prime Minister Trudeau and minister Bennett you have betrayed us, you are not honourable, you are not true to your words,” said Athabasca Denesuline Chief Negotiator Ron Robillard.

In 2000, the Dene set aside a court case that started in 1991 and began negotiating a comprehensive claim over lands and resources.

Last week they were about to initial an agreement in principle when they received an email from Bennett cancelling.

“Followed by that, received a letter from minister Bennett saying her commitment to initializing was deferred until further notice, without explanation,” said Robillard.

“It’s a slap towards the Sayisi Dene First Nation,” said Chief Tony Powderhorn. “There’s a promise been broken. Where’s the honesty? Why would she do this?”

Crown Indigenous Relations has yet to provide APTN News with an answer.

However, the area the Dene are negotiating over is in the southeast part of the Northwest Territories.

Both the NWT Metis and Akaitcho Dene have competing claims in that area.

In 2017 Thomas Isaac, Bennett’s special representative, prepared a report on all the competing Indigenous claims in the southeastern NWT.

“Collectively, the claims and issues of the Aboriginal groups noted above represent a dynamic and challenging legal, political and negotiating environment not easily resolved,” said Isaac.

“The current negotiations and related processes applicable in the Southeast NWT appear stagnant and are not resulting in sustainable, lasting solutions that all of the relevant parties, Aboriginal peoples, the government of the NWT, and Canada, can live with.”

In 2016 other Indigenous groups in the NWT were able to look at the Dene’s draft agreement and expressed concerns.

Robillard believed they had been addressed.

“We even changed some of the draft wording in our agreement and we thought everything was settled until this last minute that came up,” he said.

“We do not have any idea what the Minister…why the Minister decided to pull the plug on us.” 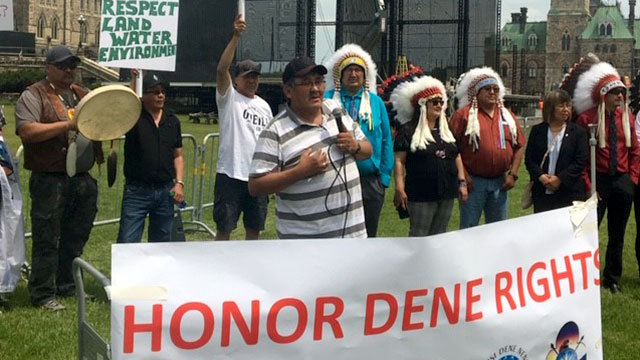 The Dene had reached a memorandum of understanding with the Inuit, where their claim overlapped into Nunavut. The agreement would allow the Dene’s one to proceed with the promise of talks at a later date to resolve outstanding issues.

“So that was something that was very successful,” said Robillard. “And we tried to do that with the Indigenous groups in the NWT with no success.”

The Dene First Nations’ demonstration moved across the street from Parliament Hill to the Prime Minister’s Office, where they were joined by NDP Leader Jagmeet Singh and a few of his Members of Parliament.

If they don’t get answers soon, the Dene are threatening to re-start their long-dormant lawsuit against Ottawa.

“We demand the minister, minister Bennett to reverse her decision and stay true to her word and the promise to my people,” said Chief Simon Denechezhe of the Northlands Denesuline First Nation.