A dance group from British Columbia that travels around the world doing performances to raise awareness about missing and murdered Indigenous women is now looking for one of their own.

Butterflies in Spirit is a Vancouver-based dance group that was started by MMIWG advocate Lorelei Williams in 2011.

Today that issue is hitting close to home.

They’re hitting streets looking for one of their own dancers.

She was last seen at a bus stop by her friend Grace Lewis.

“She had gotten off the bus stop right behind me and walked up the street that way,” Lewis said. “That’s the last time I had seen her and she had just gotten out of the hospital and she was going to get something to eat then head home.

“But I haven’t seen or heard from her since.” 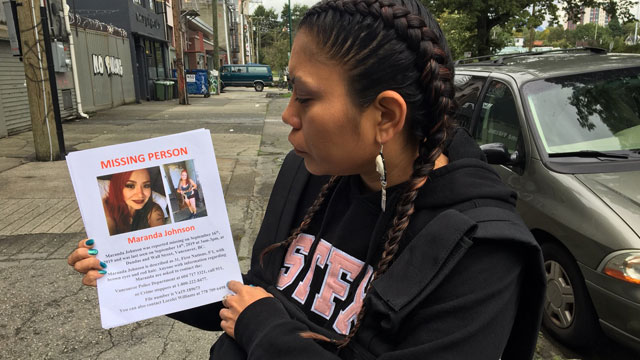 Johnson is a well known advocate for MMIWG also and is also the mother of a six year old boy.

Valerie Davidson Oar is also in the group and is helping coordinate the search.

“We’re really concerned about her she’s one of the butterflies and an amazing girl,” she said.

A group of a about ten friends and strangers have joined together to hang posters to get the word out that she’s missing.

Lorelei Williams she says it’s been an incredibly emotional rollercoaster for her.

“It’s been hard its been really hard she’s like a sister to me,” said Williams.

“I do this kind of work all the time but its not usually somebody close to me.”

If you have any information about Maranda Johnson you are asked to call your local police.

1 thought on “Update: Maranda Johnson has been found. Dance group that raises awareness of missing Indigenous women now looking for one of their own”