It’s the most significant find the Aanischaaukamikw Cree Cultural Institute has ever made: an intricate beaded ceremonial hood, tucked away in the Lachine museum in Montreal.

Since inquiries into the existence and role of ceremonial hoods began at the institute in 2011, researchers pored over innumerable museum catalogues across Canada, the United States, and even Europe.

But for the longest time, the piece of clothing – that fell out of use sometime in the mid-20th century, according to Aanischaaukamikw CEO Sarah Pash – was believed to exist only in the memory of Oujé-Bougoumou’s elders.

“We couldn’t believe that we’d been able to find one,” Pash explained. “And the provenance on it clearly identifies that it came from one of our communities, because it’s quite rare that you’re actually able to trace the history of objects that are this old.”

The headdress, made of wool, glass beads, and cotton, was donated to the museum in 1948 by Fred Russel Hamilton, a former resident of Lachine.

The piece drew curators’ attention when they began digitizing the museum’s collection, due to its “extreme fragility” and elaborate decorations, according to a borough spokesperson.

It took a conservator at the Centre de conservation du Quebec more than 260 hours – and nearly $14,000 – to restore the piece before it went on display in Lachine in 2009.

The hood is believed to have been made around 1850 to be worn by a prominent woman in the Cree community of James Bay. Some speculate that it once belonged to Jane Meskino Gunner, the wife of Mistassini Chief Joseph Gunner.

According to Pash, hoods of this type were once very commonly used in Cree communities as a marker of celebration after an important hunt, or when camps were moved from one location to another.

While the Aanischaaukamikw Cree Cultural Institute does currently have a similar hood on display, it’s a replica – a creative rendering by artist Kristen Auger. 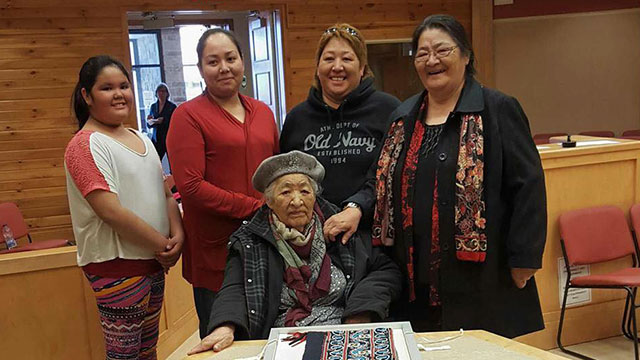 “They were a huge part of our spiritual and ceremonial and our community life,” Pash said. “[the hoods] are very important to the role of having us really understand the role of women in our community, and the central role that women play in ceremonial, spiritual, and traditional life.”

The piece was loaned to the institute between 2016 and 2017, so that Gunner’s descendants could observe and interact with a rare piece of their history.

Due to the sacred nature of the item, Cree Grand Chief Abel Bosum recently petitioned the City of Montreal, asking for a permanent repatriation back to the Cree nation.

The City of Montreal does not currently have a standing policy on repatriation of significant or culturally relevant items; in fact, several of its museums lack the necessary information to properly guide the repatriation process.

Having studied both archaeology and museology, Montreal Mayor Valerie Plante says that she’s open to the possibility.

“All issues related to the repatriation of archaeological remains and artifacts that have belonged to Indigenous Peoples are currently under intense consideration as part of our Reconciliation Strategy,” Plante said in a statement to APTN News.

For now, the hood remains in archive – a controlled setting meant to ensure preservation – while the repatriation file is under review.