InFocus
Imagine having a sick five-month-old and teams of medical staff working for months trying to figure out why he vomits when he eats and struggles to gain weight.

But then one lone doctor meets you and instantly decides it’s your fault, and calls child and family services (CFS) to apprehend your baby.

That’s the reality a Winnipeg couple faced in 2013.

They spent more than $200,000 to fight Metis Child and Family Services in Manitoba, as well criminal charges for starving their baby. Charges that were eventually stayed before their baby was returned 10 months later.

Their family was devastated as they fought an uphill battle against agencies and departments that have deep pockets of government funding — and seemingly a will to drag the matter on for as long as possible despite mounting evidence that this case was built on one doctor’s opinion of parental neglect, not medical fact. 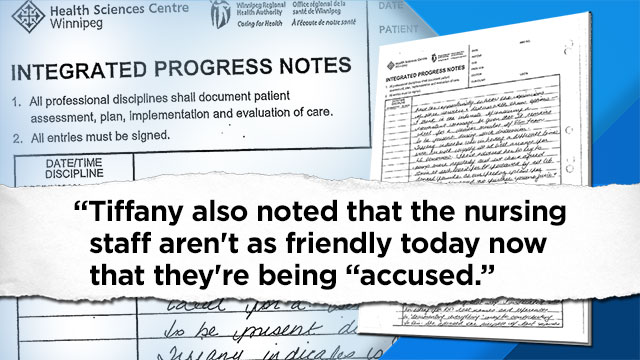 (While a team of medical professionals worked with the Evans’ to determine what was making the baby sick, one doctor believed the parents were starving and neglecting the baby. In this entry in the infant’s medical file, the doctor  notes how the parents felt “accused” after she made the allegation.)

Tiffany and Rob Evans were middle-class professionals happily raising their two daughters from previous relationships, along with their infant son.

Years earlier, Tiffany had even worked as a foster and respite worker for high-needs children with several certificates to her name.

Their ordeal began in October 2013 when they went to a Winnipeg hospital for medical tests for their then-five-month-old son who had been sick for most of his life.

He was admitted so that a team of medical professionals could monitor how he feeds and run a battery of tests in hopes of diagnosing the problem.

“Everybody was working together at that point,” Tiffany said, thinking back to the several days they had been at the hospital.

“When it changed over to this other doctor, it was like in an instant, now everything changes. She looked at us and she said, ‘By the way, you’ve starved and neglected your child since birth and child and family services has been called.’” 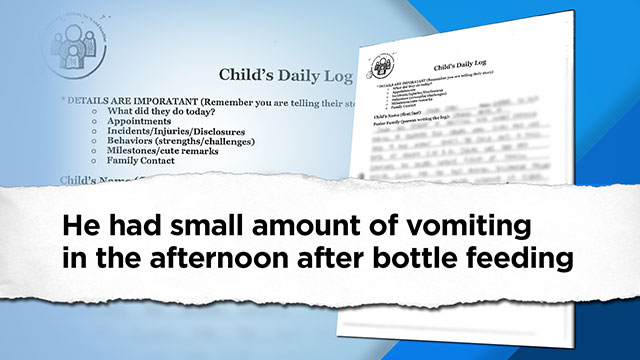 (Daily logs show the infant’s symptoms – which had been blamed on his parents — continued throughout his stay in foster care. He had gastroesophageal reflux, which he grew out of as a toddler)

Her husband Rob remembers thinking, “We were just blown away, because you know, you’re going into the hospital for what you think is to get your son better, and then you got somebody who is completely shooting off the deep-end and coming up with all kinds of allegations that aren’t even remotely accurate.”

Soon after, tests showed the baby had gastroesophageal reflux disease, which would explain the vomiting and weigh loss.

Despite that, while still in hospital trying to find a feeding plan that worked for the little boy, CFS came to take the baby. Several nurses, social workers and security guards gathered around for the apprehension, as did the doctor who set it all off.

“This was a professional engaging in what I’d in short-hand describe as some sort of professional hubris — making allegations that were not well-founded or tested, then fed into a child welfare system that does sometimes function more like a law enforcement agency than an agency that is there to protect families and work with families,” said the couple’s lawyer Jurgen Feldschmid.

He said the agency was in a tough spot because if there was indeed a mental health issue with one or both of the parents and something later happened to the baby, the agency would have to answer why it didn’t act on the doctor’s red flag.

A psychiatric evaluation later ordered by the court report showed Tiffany was not mentally ill but had signs of depression and anxiety associated with the trauma of her child being taken.

CFS and court records show the agency had some safety concerns about the foster home the child was in, namely that one caregiver had to be told to not leave the baby alone on a couch. And daily activity logs for the baby showed numerous days when he vomited after eating, just as he had with mom and dad.

Despite this, he was kept in care for 10 months. Even after his return, the court fight with CFS continued as they haggled over the agency’s involvement with the child going forward.

As well, Tiffany had to pay a lawyer to fight criminal charges, which were later stayed, of failing to provide the necessities of life.

Even though they were cleared of everything, there’s no recourse to seek financial compensation because the court granted a protection order, essentially validating the apprehension.

“The (CFS) agency was successful in seeking the order they got,” explained Feldschmid, who represented the couple in their the CFS matter and helped them prove they are not a danger to their son or other children, who during this time had to stay with other relatives.

“But, even if they didn’t get it, agencies are generally immune from covering parents’ court costs. It’s similar to how if you’re charged with a crime and you’re acquitted or even if the charge is stayed, it doesn’t mean you can sue the Crown to be reimbursed for your legal costs.

The Evans said in addition to the emotional damage, their ordeal has left a financial hole for years to come.

“All of the money we spent was taken away from our children’s future,” said Tiffany.

“Their education, extra-curriculars — for the rest of their life.”