Bruce Spence is not going to give up his NDN CAR vanity licence plate without a fight.

Spence has agreed to be part of a legal challenge by the Justice Centre for Constitutional Freedoms (JCCF).

The JCCF was in a Winnipeg courtroom this week defending another Winnipeg man whose Star Trek-inspired ASIMIL8 plate was revoked by Manitoba Public Insurance (MPI).

The provincial Crown corporation said it received complaints from members of the public who found both licence plates “offensive” and ordered them off the road.

But Spence, a producer at APTN News, disagrees.

“I don’t know how NDN CAR could possibly be offensive,” he said, noting he applied for the wording seven years ago to honour his Cree heritage and a song of the same name by musician Keith Secola.

“I know CAR isn’t an offensive word so it must be NDN. And that’s a contraction for Indian, which is a legal term. Besides, this car is driven by an Indian.”

Spence said he received nothing but “thumb’s up” from other motorists and requests from pedestrians to pose next to the plate. He said the demand to turn in his plates in February shocked him.

Spence said JCCF, a Calgary-based legal advocacy organization specializing in Canadian constitutional law, is representing him at no charge.

“I was going to try and do this on my own anyway,” Spence said Wednesday, “and they approached me after seeing the APTN story.” 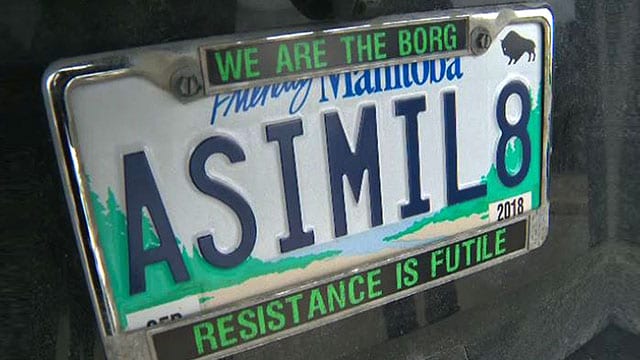 Winnipeg’s Nick  Troller launched a legal challenge after his plate was revoked.

“Ultimately, all these cases boil down to this: in a free country we do not have the legal right to not be offended,” he said in a telephone interview Wednesday.

“One person’s right to express him/herself has to outweigh another person’s claimed right to be offended.”

Spence doesn’t know who complained about his plate and was irked he couldn’t respond.

“I was hoping for an appearance before some sort of board,” he said, adding that’s something he hopes the judge in his case agrees with and orders MPI to introduce.

“Some sort of show-cause hearing” for losing a plate that was initially approved.

MPI has said licence plates are its property and it gets to decide what’s written on them and when to revoke them. It has not revealed who complained about Spence’s plate.

Carpay is a former Alberta provincial director of the Canadian Taxpayers Federation and a former candidate of the federal Reform Party and provincial Wildrose Party. He said his group is not-for-profit and relies on private donations.

“We’re making an argument that this violates the (Canadian) Charter (of Rights and Freedoms) Section 2(b) freedom of expression,” he said. “Our mission is to defend constitutional freedoms of Canadians from violation by government…or governmental authority.”

Carpay, a lawyer, said freedoms are lost by “small encroachments.”

“Say, with these licence plate cases. If we don’t win them we move closer to a society where people have a legal right not to feel offended which means that there’s less freedom of expression.”

The judge in the ASIMIL8 case reserved his decision. Spence does not have a court date yet.

‘Death by RCMP’ a common but complex thing in Nunavut,...