There’s an urgency in Gillian Gear’s voice as she asks her peers how to attract climate change educators to visit the small K-12 school her son attends in Postville, Labrador.

She’s seen the devastation in the Beaufort Delta, NWT with her own eyes.

Gear, an Inuk from Nunatsiavut, is a delegate at the northern leader’s summit in Inuvik, NWT.

“We all notice things changing within our region,” Gear said. “We are really isolated so we get freight from a twin otter or by boat in the summer time. If climate change effects our weather so greatly how are things going to come in.

“It can be up to a week before a plane can come in because we are fogged in so badly.”

(Gillian Gear, a delegate with Ecology North learns how she can inspire more educators to discuss climate change in her home community of Postville, Labrador. Photo: Charlotte Morritt-Jacobs/APTN)

Youth have spent the last few days meeting with Elders, leaders, experts and locals to learn about the effects of climate change and discuss ways to adapt.

Armed with a pen and paper and backed by the support of their peers the delegates brainstorm achievable projects they can bring back to their home communities which will raise awareness around climate change.

For Gear, there is no better time than the present to do so.

The only fluent Inuktitut speaker in Postville passed on four years ago, and cultural teachings are at risk of being lost.

“I am not sure if anyone knows how to make a pair of traditional waterproof, sealskin boots in Postville. It is definitely something people want to see.

“Like myself, I would love to learn how to go out and kill a seal, skin it and dry it and make something out of it,” she said. 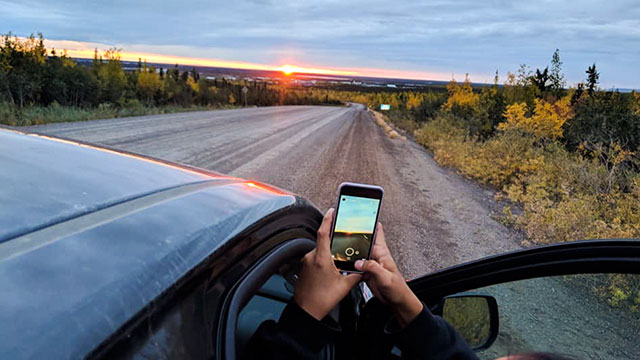 (Youth travel the Inuvik to Tuktoyaktuk Highway, a $300 million dollar stretch of road that will need constant repairs because of melting permafrost. Photo courtesy: Ecology North)

In the arctic it’s two degrees warmer than it was 70 years ago.

The small rise in temperature has a big impact on the environment.

Scientists have predicted rapid changes because of climate change including a summer free of sea ice and a barren land without caribou.

For gear, the only way to slow the trends is through education.

“In Postville we have less than 35 students, there’s not a whole lot of teachers there,” she said.

“In high school if you want to do an academic stream you have to do distance learning.”

“What are you afraid of losing to climate change?”

It takes only a matter of seconds before youth have filled a whiteboard with answers like loss of hope, mental health deterioration and even death. 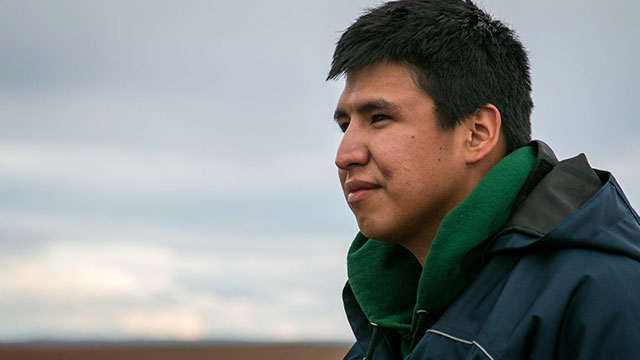 (Ethan Eyakfwo looks out to the rolling hills of the Delta after measuring permafrost slumps. Photo: Charlotte Morritt-Jacobs/APTN)

Ethan Eyakfwo announces his plans to advertise through posters, social media and word of mouth for an on-the-land camp geared towards youth he hopes to facilitate.
It means that he wants to run on-the-land camps that do just that, bring youth on the land for weeks at a time where they do group activities in a  traditional camp base environment.

He’s from Gamètì, NWT and as the only male delegate of the summit, he says he feels a great responsibility to take all leadership opportunities to then return back to and help his community.

Like most of the delegates, Eyakfwo approached summit with little insight into how climate change is effecting regions outside of his own.

But after listening to other youth like Gear share their fears around the changing landscape, he says his understanding deepened towards of the severity of the crisis.

“It’s very hard to talk about. She [Gear] was almost crying. I felt that connection with her, I was getting emotional too about it. I just wanted to say that it is hard to accept and heard about that,” Eyakfwo said.

He travels around to small communities to share his identity is rooted in the land. During the brainstorming session Eyakfwo has a moment of clarity; If climate change impacts the caribou herds, it will have an effect on the drum.

“I never really connected the two until now. I was thinking about the effects of climate change and what will happen to my region if it is effected drastically, now especially with the drum. The drum, for us it is very powerful. It is part of us,” he said.

Eyakfwo and Gear both agree, there is an individual responsibility to do what’s possible to save the north and that starts with sharing what they have learned at the summit.

The delegates are tired but hopeful after a week learning about global warming. Each participant is expected to follow up with their projects with the support of the summit host – Ecology North in Yellowknife.

Even as the landscapes change around them back home, they will each have memories of this trip and the support of other northern youth who understand just what they are going through and what needs to be done.