Cat Lake First Nation in northern Ontario has declared a state of emergency related to Jordan’s Principle due to mold in most homes in the community.

According to officials in the community, three children have been medevacked out of the community over the past two weeks because of illnesses.

They say numerous other children are suffering respiratory, skin and multiple other medical issues believed to be related to exposure to mould.

Derek Spence, a Councillor for Cat Lake First Nation says something needs to be done now.

“Day in, day out we face at least on medivac out of community” Spence told Infocus guest Host Dennis Ward.

Spence says it’s not only children affected by adults and elders.

“A lot of people are getting sick and dying from respiratory problems.” Spence explained. 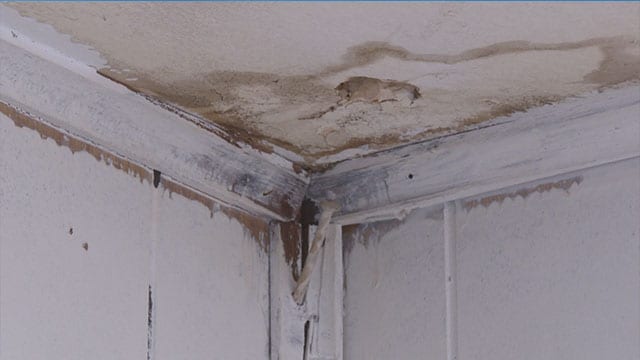 (Mold in one of the homes in Cat Lake)

NPD MP for Timmins-James Bay, Charlie Angus, visited the community to see first hand, the conditions of the homes.

“The community decided to declare Jordan’s Principle declaration because it forces the government to act. They had 12 hours to respond, up till now all we’ve gotten from the Minister is vague talk” said Angus.

“We’re four weeks into a state of emergency. It took the Jordan’s Principle declaration to actually light a fire and get them to start to send in medical teams.” Angus said on Wednesday’s episode of InFocus.

Selena Castel, who is from Mathias Colomb First Nation in northern Manitoba moved to Winnipeg because her son River is severely disabled.

Castel believes it’s related to mould he was exposed to in his school.

As APTN News has been reporting, the school has been closed since December and remains closed due to issues with mould.

Castel says leaving the community was a very difficult decision but the family had no choice.

“When it comes to your child you will do anything. And anything in your power to make sure your child is with you.”

Castel says she is still searching for answers about her son’s condition.

“Why is my son deteriorating? We’re going to be bringing my son home in a casket, instead of bringing him home alive” she said.

Jordan’s Principle is named in memory of Jordan River Anderson, a child from Norway House Cree Nation in Manitoba. Jordan spent over two years in hospital caught in a jurisdictional dispute between the Manitoba and federal government.

He remained in hospital as both governments argued over who should pay for his home care.

Jordan was five-years-old when he died.

Jordan’s Principle is supposed to remove the jurisdictional issues as the federal government is tasked with paying for support and services for First Nations children.