Canada could be going to court once again on a child welfare matter.

On Friday Indigenous Services Minister Jane Philpott and national Indigenous leaders announced they would co-develop new child and family services legislation in an effort to put child welfare into the hands of First Nations, Inuit and Metis communities.

But hours after that announcement the Department of Justice sent a letter to the Canadian Human Rights Tribunal (CHRT) saying the issue of compensation for children who have suffered in care may have to involve litigation.

The letter, signed by Robert Frater, the chief general counsel for Justice Canada, says the government is “committed to discussing the compensation issue with the parties, and attempting to reach a resolution” to the matter of compensation, “but in view of the fact that we have not yet received final instruction, it is apparent that we will likely have to set the issue down for argument on one or more of the dates agreed upon for the new year.”

That final instruction on compensation, according to a government source, will come from cabinet.

Philpott was questioned on the issue by First Nation leaders Wednesday at the Assembly of First Nations Special Chiefs Assembly in Ottawa.

The minister said Canada wants to settle the compensation issue “without using courts or tribunals — that to me is the way to do it.”

A 2016 CHRT ruling said that Canada denied services to First Nations children living on-reserve, which in turn had adverse impacts on them. The tribunal also said that federal funding mechanisms incentivized the removal of children from their families and placement into state care.

The tribunal also has jurisdiction to compel government to compensate children who were victims of government’s discriminatory practices, including those who were taken from their families.

While government has begun to change its policies on child welfare, including last week’s promise of new child and family services legislation in the new year, it has not settled the issue of compensation. 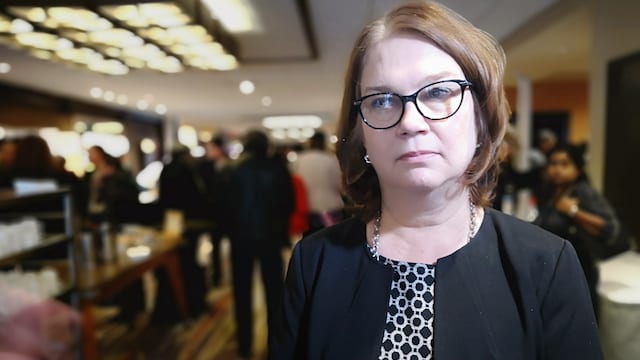 Indigenous Services Minister Jane Philpott says Canada would like to settle the issue of compensation for First Nations child victims of government discrimination outside the courts. Justin Brake/APTN News.

“We’re prepared to have these conversations with the right people, and as I say ideally to do it outside a court process.”

Blackstock pointed out that Canada’s position on compensation in 2014 at the closing arguments of the tribunal hearings “was that they owed these kids no money, that from their point of view they didn’t discriminate and therefore no compensation should be awarded.”

It’s not clear how far the feds are willing to go in fighting the Caring Society’s request for full compensation as laid out in the Human Rights Act.

“As soon as the parties to the tribunal are happy to drop that legal mechanism and to work with us directly, we would be extremely happy to do so,” Philpott said Wednesday, adding the government has already made strides in addressing issues raised by the tribunal, “including the $1.4 billion we got in 2018 to ensure that we’re paying for the prevention of apprehension of children.

Philpott said it’s “in everyone’s best interest—particularly the interests of the little ones, the children—if we can work in a collaborative way.”

Blackstock said the Caring Society has been in talks with “high level officials” from Indigenous Services Canada and Justice Canada “for many many months” about compensation.

“As far as I’m concerned, if we can settle it and get that support to children sooner then I want to use that pathway,” she said.

“But as always, if there is a rights breach or if Canada is not prepared to fulfill its responsibilities, then for us at the Caring Society, we’re prepared to litigate.”

10 thoughts on “Canada, advocate at odds over compensation for First Nations child victims of state discrimination”