A Williams Lake, B.C. couple who was abruptly given their baby back Wednesday on the eve of a family court appearance Thursday, lost her again within 24 hours.

Social workers demanded either the maternal or paternal grandmother to live with the couple. A judge agreed, although no one has explained to the family why they need parental supervision to parent their newborn, who was taken after hospital staff called the provincial Ministry of Children and Family Development (MFCD) to report that the mom was neglecting her baby 90 minutes after having a C-section.

According to the father, after court on Thursday the couple – first-time parents in their early 30s – and the father’s mother returned to the couple’s apartment, where an argument about child care broke out.

The grandmother left and called police, who responded along with a caseworker to remove the baby, the father told APTN. The baby has since been placed with a paternal aunt.

‘Baby H’ is 16 days old. She’s now in her fourth home since being seized from the Kamloops Royal Inland Hospital on June 14.

The paternal grandfather was against the plan imposed by MFCD from the beginning. He feels the parents have done nothing wrong and MCFD has no business forcing adults to live with a parent in order to look after their child, and that the ministry is being meddlesome and arbitrary.

In an audio recording of a meeting about arrangements to get the baby back, both the mother and father expressed concerns about having to live with their mothers.

Social workers wouldn’t back down and a judge backed them up.

Baby H’s paternal grandfather said the plan was destined to fail and he’s sad that it did, but not surprised.

“MCFD screws up and they punish the parents,” he said. 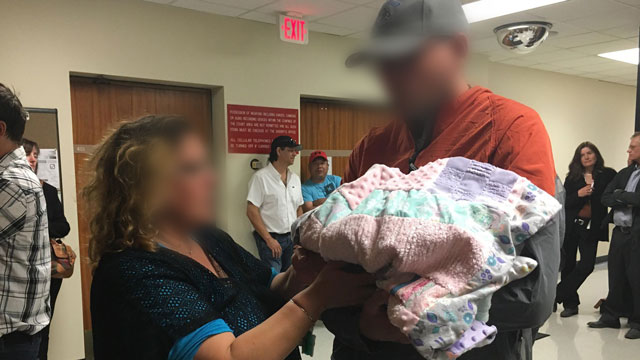 Baby H and her parents at the Williams Lake courthouse. File photo.

Another meeting with social workers is scheduled today to come up with a new plan.

The grandfather says the only acceptable plan is to return the baby and leave them all alone.

Meanwhile the baby’s dad said on top of the ongoing stress from all this, they’re realizing they will have to start looking for a three-bedroom house.

“If they’re not backing down on someone having to live with us, we need three bedrooms; this place is too small,” he said.

“We all know that moms who have had their children stolen from them – especially Indigenous moms – are more likely to suffer from suicide, heart attack, stroke, depression, anxiety, addictions, homelessness,” she told APTN Thursday.

The Truth and Reconciliation Commission suggested parents-to-be receive prenatal services and preventive care to learn how to safely care for their children.

With files from Kathleen Martens.