Indigenous artifacts found at the construction site of a contentious pipeline project were likely not in their original location, says British Columbia’s energy regulator.

The Unist’ot’en clan, a hereditary house group of the Wet’suwet’en First Nation, complained last month that supporters recovered two ancient stone tools and observed other artifacts at the site where Coastal GasLink is building a natural gas pipeline.

The company suspended work on the line, which is a key part of a $40-billion LNG Canada project in northern B.C., while the BC Oil and Gas Commission investigated.

The commission said in an information bulletin that investigators found stone artifacts on top of frozen clay soils and the archaeology branch of the provincial Forestry Ministry is working to return the items to the appropriate Indigenous communities.

“The soils upon which the artifacts were found would not typically contain any such cultural artifacts and this was likely not their original location,” the commission said.

“However, a definitive determination on their exact location of origin cannot be made.”

The two stone tools that were originally reported discovered were not present at the site, the information bulletin said.

The Unist’ot’en have previously said the two tools were removed to protect them. The clan has also said an archeologist from the Smithsonian Institution estimated one of the tools dates back up to 3,500 years.

In an emailed response to questions on Monday, the commission said the team examining the site was not aware the two tools had been removed.

Archaeologists found four artifacts in total – one complete biface tool and three biface fragments – but could not make a cultural association, it said.

The commission acted on an order under the Heritage Conservation Act to secure the four artifacts for protection and further examination, it added.

It said the area had been logged twice, prepped and replanted, and all soil layers where cultural artifacts would typically be found had been removed and were at some distance from where the items were found.

The Unist’ot’en clan said Monday the artifacts were recovered from a site that “had been heavily disturbed” by Coastal GasLink bulldozers. 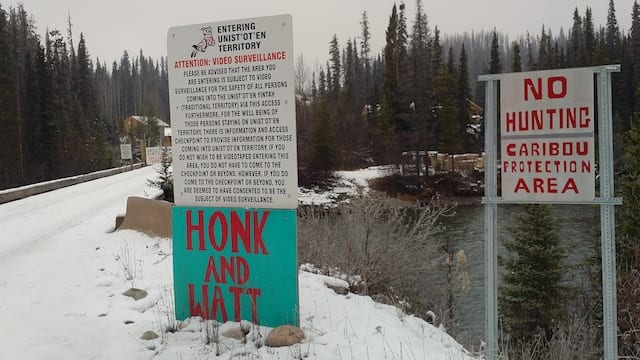 One of the many signs outside the Unist’ot’en Camp. (APTN file)

It said in a statement that the “cryptic bulletin” from the commission “ignores the role that CGL’s industrial activity has played in disturbing this cultural site and displacing these artifacts.”

Asked about this allegation, Coastal GasLink referred questions to the oil and gas commission.

The commission said “removing artifacts from their original context greatly diminishes the information that can be extracted from them.”

The Unist’ot’en said they have not been included in the archeological work done on their territory.

“Wet’suwet’en cultural artifacts cannot be properly identified and analysed without the input of Wet’suwet’en people,” it said.

Coastal GasLink said in a statement it has been cleared to resume construction and it has filed a mitigation plan that has been accepted by the commission and the archaeology branch. The plan requires an archeologist to determine if there is additional cultural material, sample topsoil stockpiled on the edge of the site, supervise construction operations and further assess the topsoil when it is spread back on the site.

The company said the province has added the site to its archeological database based on the presence of artifacts at the spot.

The company quoted the Forests Ministry as saying there was “strong evidence” the artifacts had been moved from their original location, as they were found sitting on top of a frozen slab of clay. Remaining sediments are considered to be “culturally sterile,” it added.

The Forests Ministry said in a statement it was impossible to determine the age of the artifacts or attribute them to a specific Indigenous community.

“There is no way to determine when or how they came to be in the location,” it added.

Analysis of the artifacts is complete and the branch is now working toward returning them to the appropriate communities, it said.

The Coastal GasLink pipeline would transport natural gas from northeastern B.C. to LNG Canada’s export terminal in Kitimat on the coast.

In January, police arrested 14 people at a blockade in the area.

The company says it has approval to build the pipeline from First Nations along the pipeline, but some Wet’suwet’en hereditary chiefs say they haven’t given their consent.