The Chief of Whispering Pines/Clinton Indian Band says Ottawa should favour his group’s bid when deciding who buys a stake in the Trans Mountain expansion project (TMX).

“Anything that happens we’re the ones bearing all the risks,” said elected Chief Michael LeBourdais.

“Not the ones in southern Saskatchewan or northern Alberta, so we should have preferential treatment when it comes to purchasing, we should have dibs if you will.”

“And if we can’t do it then by all means let somebody else do it.”

LeBourdais is part of the Western Indigenous Pipeline Group (WIPG).

It represents the impacted communities that want ownership in the pipeline.

“We’re tired of watching everybody else garner wealth from our resources and not share it with us appropriately,” said LeBourdais.

Two other Indigenous group’s, the Iron Coalition and Project Reconciliation, have also come forward to buy a stake in the TMX pipeline.

“These other groups don’t live here so it’s hard to take them seriously when they say they have our best interest at heart,” said LeBourdais.

“No it’s us along the line that have our interest at heart, it’s our traditional territory.”

(“I think with the partners that we have now we can do it,” says Chief Michael LeBourdais. Photo: Laurie Hamelin/APTN)

From end to end the reserve stretches about three kilometres.

And for the last six decades there’s been a pipeline running through its entire length.

“It’s not a long distance at all, but it goes right down the middle,” said LeBourdais.

Trans Mountain built the pipeline in 1953.

In 2007 Kinder Morgan approached the band about its intent to twin the line from Alberta to B.C.

Despite never having any issues with the original pipeline, LeBourdais says he and his community were immediately against the project.

“We’re rural farm boys, cowboys, whatever you want to call us,” said LeBourdais. “We raise our own cows and pigs for winter food, as well as we hunt for deer.

“And so we really need their feed to be clean, to be as organic as possible so that is really what drove this because when they came and said they were going to twin it, it scared us because we didn’t understand what that meant for the environment.” 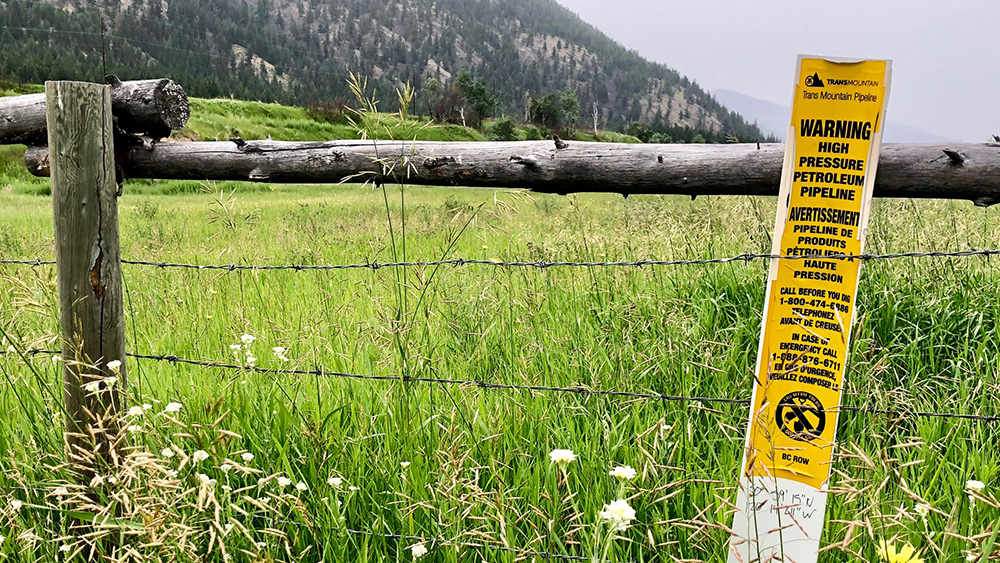 For five years the band fought the project.

But after a full year of intense negotiations and consultation, the pipeline was approved unanimously in a community vote.

In the end, the chief said he wasn’t interested in just signing a mutual benefit agreement.

He’s been pushing for equity in the line since 2012.

But a stake in the project wasn’t an option until Canada bought the pipeline.

“We understand the oil and gas business and its value, so owning a piece of it would accomplish a lot of things for us,” said LeBourdais. Firstly, housing, education, jobs.

There are only 20 homes in his community for 80 full time members.

The rest of the 100 members live off reserve.

The chief says revenue from the pipeline will give his band a better future.

“I want to have the governments, provincial, federal and companies see the good folks here and invest in them and that is all I am trying to do,” said LeBourdais.

Ty DeRose is excited for the possibility of working in his home community.

He was piping in Alberta for 15 years, but returned home in 2015 during the industry’s downturn.

“I’m looking forward to the work and being home every night,” said DeRose.

“To be part of the pipeline build and to own the pipe is really new to us.”

But some people believe the project is no longer economically viable.

“I’m not worried, the guys I have crunching the numbers are the guys that did it for Kinder Morgan,” said LeBourdais. “We’ve partnered with Toronto Dominion Securities. Certainly since Trudeau’s approval we have had other folks making us offers.

“When we have other Canadian financial institutes calling saying we would like to partner, would like to help, I think those guys have more credibility than the folks on twitter.”

The Federal Government is expected to meet all Indigenous groups interested in equity late this summer.

“I think with the partners that we have now we can do it, we can purchase as much of the pipe as we can,” he said.