A new blockade is up on the only road that leads to the Unist’ot’ten Camp in the B.C. interior.

The Gitumden Clan of the Wet’suwet’en Nation is building what it says is a checkpoint in support of the Unist’ot’ten Clan’s fight to protect its territory from industry.

The clan says it now controls who has access to the Morice River Road West.

“We are constructing a camp in support of the Unist’ot’en Clan,” says Molly Wickham from the Gitumden Clan of the Wet’suwet’en Nation. “We will be here until there is no threat of trespass onto our territory by unwanted industry.” 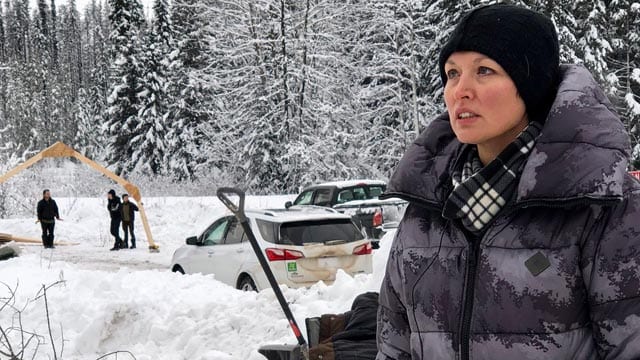 (Molly Wickham from the Gitumden Clan of the Wet’suwet’en Nation. Photo: Laurie Hamelin/APTN)

On Friday, a B.C. judge granted Coastal GasLink, a subsidiary of TransCanada, an interim injunction against the Unist’ot’en Camp and ordered the residents to take down a barricade that the company says is blocking access to the area where they need to build a portion of the LNG pipeline.

The 670 km pipeline will run from Dawson Creek, B.C. to Kitimat and carry fractured natural gas.

The Unist’ot’en clan were given 72 hours to take down the barricade that blocks access to a bridge and the camp. 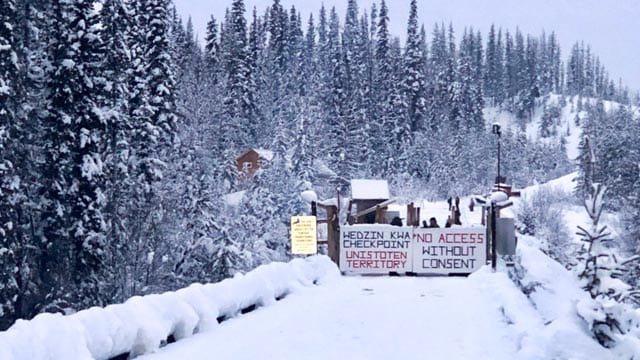 (The barricade at the Unist’ot’en Camp in B.C. Photo: Laurie Hamelin/APTN)

The barricade is still on the bridge and as of this posting, but it remains unclear whether the company has tried to cross into the camp.

Construction of the camp started eight years ago to stop the Chevron Pacific Trail Pipeline – and two other pipelines that were proposed.

Freda Huson and her partner built their house on the GPS coordinates where the pipeline was to cross.

It has since expanded to three structures including a healing centre that accepts people from across their territory and visitors from other parts of B.C.