Charlotte Morritt-Jacobs and Chris MacIntyreAPTN NewsThousands of young athletes in the north are cancelling their planned trip to the Yukon for the Arctic Winter Games because of concerns over the COVID-19 virus.Just last week organizers of the games were confident that the games would go ahead.That confidence evaporated Saturday when officials announced the cancellation.“I’m making this recommendation out of concern for the health and safety of Yukoners,” said Dr. Catherine Elliot, chief medical officer of health for the Yukon.Although there are no reported cases of COVID-19 in the north and the risk remains low, other regions are seeing an unexpected spread of the virus.With the number of reported cases of COVID-19 growing around the globe, precautions need to be taken to ensure Yukon is protected from an outbreak.Organizers and co-hosts say they are disappointed to have to make this decision and express deep gratitude to all involved with participating in the Whitehorse 2020 Arctic Winter Games.Danica Towtongie and Naomi Yukon have trained for months.“I was very disappointed when I found out. Our goal in going was to get gold! We have been practicing two times a day,” said Naomi Yukon.They’re part of a team of roughly 2,000 participants from the Northwest Territories (NWT) who were scheduled to go. 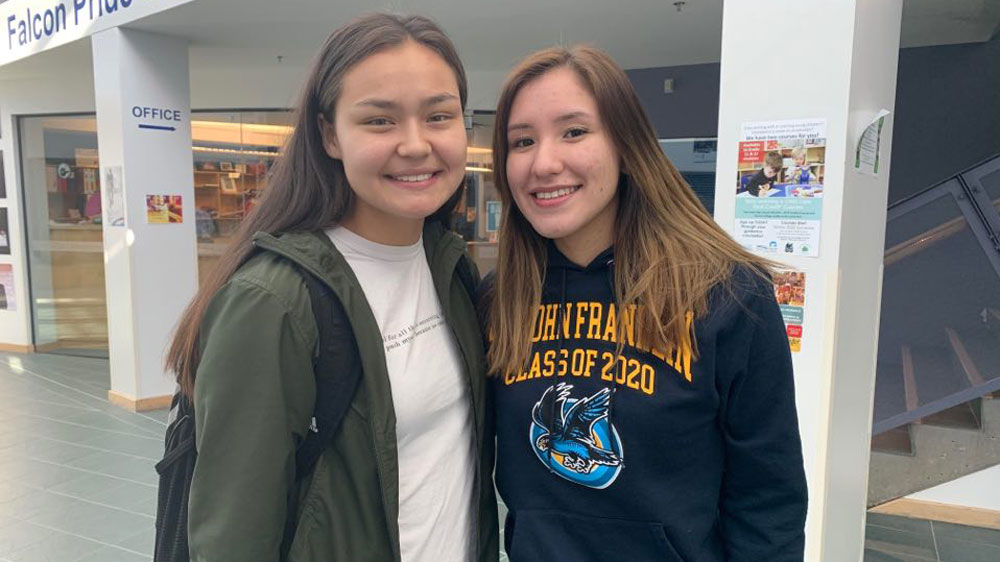 (Danica Towtongie and Naomi Yukon trained for months to participate in the upcoming games. Photo: Charlotte Morritt-Jacobs/APTN)Yukon hails from the Sahtu region of the NWT.Her talents have taken her across Canada, and brought her to AWG 2018 and 2016.Sadly, at the age of 17 she is gearing up to leave the NWT for post-secondary and AWG 2020 was her last opportunity to compete at the games.“I am so happy to represent Délı̨nę and work for it with basketball. I have so much passion for it. I feel like they are proud of me especially if we went to AWG,” she said.Aaron Wells, coach of the NWT ladies basketball team said he was shocked by the news and knows many of the team members such as Yukon have worked extremely hard.“For a lot of these girls it has been on their minds a lot longer than the tryouts. They have been training, working out and perfecting their craft and really looking forward to the event.The female basketball team had a really good shot of winning goal this year and to make history so to have that taken away is disappointing,” he said.The games were last held in the South Slave region of the NWT in 2018.Towtongie, 16, said she loved her experience participating in those games.“I think the games are a great cultural experience and it really put our skills on the national and international stage even. It was super competitive and it is one of the only games where teamNWT is pretty close the games we play against other contingents,” said Towtongie.Watch Charlotte’s story on NWT athletes.

This would have been her time competing in arctic sports, had the 2020 games taken place.Representing her Inuit culture and birth community of Rankin Inlet, Nunavut was something she was most looking forward to.“I know at the tryouts there was a lot of different combinations of Inuit culture incorporated in it,” she said. “It was just such a great feeling because I am not really use to being immersed in my own culturebecause I moved to Yellowknife at such a young age.”NWT athletes will be reimbursed for their participant and will be able to keep their uniforms, according to Sport North official statements.While Yukon and Towtongie may not have been able to go, they both have plans on playing high-level competitive sports for years to come.Arctic Sports Coach Eric Porter was holding an Arctic Sports demonstration with one of his athletes when he heard about the cancellation.“Complete shock right away” Porter told APTN. “It takes time to sink in.”Athletes have been training for the past 2 years in preparation for the games that were scheduled to start on March 15th 2020.Porter expressed disappointment for his junior athletes that are in their later ages.“If they were going to break any records that chance is gone because the next games they’ll be adults”