In front of the new Indigenous space on the sidewalk of Wellington Street sits a small wigwam.

It went up overnight and has space for one person.

“The Algonquin people are here,” she said. “And this is why I’m here, to send a clear message: the Algonquin Nation has had enough.”

(The wigwam set up in front of 100 Wellington St. in Ottawa across from Parliament Hill. Photo: Todd Lamirande/APTN)

At a news conference on Monday, the Algonquin announced that since the former embassy sits on their traditional unceded territory, they should be equal partners in the building and be able to make decisions about its use.

“And it’s time we take our rightful place here at the capital city where our people are from. Our ancestors gave up this land for everyone to live here in harmony.

Polson said the lack of respect comes from the Inuit and Metis and that MNC President Clem Chartier and ITK President Natan Obed have refused to sit down and meet the Algonquin. 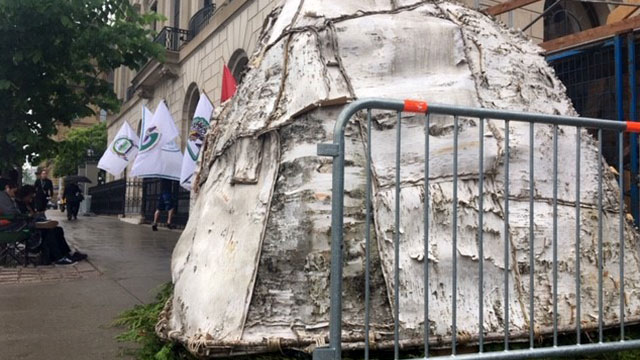 The ITK declined to comment on this situation to APTN News, while the Metis ignored requests altogether.

In a statement to APTN, Crown Indigenous Relations said the Algonquin have been invited to all meetings regarding the Indigenous space and that they are merely facilitators.

Polson says Crown Indigenous Relations told her she has to work things out with the other three organizations herself.

“That’s not an answer. She’s the decision maker here. She should at least help us, help us get to that table and have those discussions.”

Polson said she will stay in the wigwam at least through the Indigenous Day long weekend and hasn’t ruled out the possibility of legal action.