Alberta Premier Jason Kenney brought Indigenous leaders from Treaty six, seven, and eight areas to government house in Edmonton to talk about the province’s energy sector and where the communities fit in.

It will be responsible for awarding $1-billlion to Indigenous groups who want to invest in the energy sector, by providing loan guarantees.

“While there has been a lot of great progress to celebrate our First Nations, the truth is there is still too many Aboriginal Albertans who live in poverty who have not enjoyed the prosperity of this province,” Kenney said. “And our government is determined to work collaboratively with our First Nations to change that.

“To ensure that Aboriginal Albertans are full partners in prosperity.”

He said  that energy investment can be done responsibly to the environment.

“Is it possible to have sustainable development and promote respect to Mother Earth at the same time? And I think clearly from our experience , the answer is yes,” he said.

The money from the IOC will go to First Nation and Metis Communities who want to invest in the energy sector.

That includes investing in the Trans-mountain pipeline expansion project, or in renewable energy. 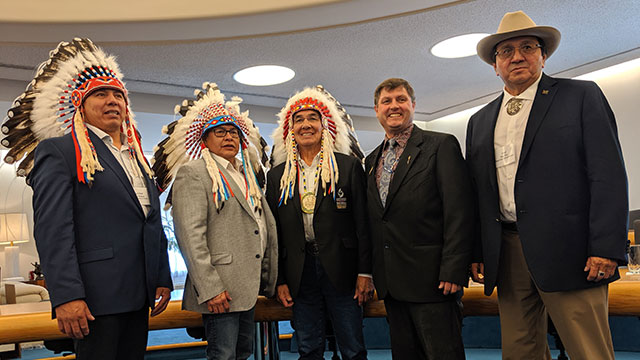 That was what Chief Roy Fox from southern Alberta’s Blood Tribe wanted to hear.

“We have a 200 megawatt wind farm, and we are proposing another one, another 200 megawatt,” he said.

“It was encouraging to hear the premier talk about continuing with that kind of approach.”

Kenney said these meetings will become an annual event.

According to the chiefs here, the first one started well.

“Working relationships, and this billion dollar fund to backstop investments for First Nations to have their foot in the door, and the economic benefits of Alberta – that was ideal thinking for us,” said Grand Chief Arthur Noskey.

The IOC will be created this fall in a proposed bill by the government.