Hereditary Wet’suwet’en leaders turned to the Assembly of First Nations (AFN) last week amid an ongoing threat of RCMP retaliation to the continued defence of unceded Wet’suwet’en territories by members of the Unist’ot’en House group.

APTN News has learned that on Jan. 10, as hereditary chiefs were brokering a deal with RCMP over the enforcement of a B.C. Supreme Court injunction granted to a private pipeline company against Indigenous land defenders, AFN National Chief Perry Bellegarde called RCMP Commissioner Brenda Lucki “to ensure the RCMP is operating in good faith and to remind the RCMP they are there to serve and protect, not incarcerate,” a briefing note share with APTN by the AFN said.

The AFN note confirms Na’Moks, a hereditary chief of the Wet’suwet’en Nation, requested Bellegarde intervene on the matter days after armed officers of the RMCP’s tactical and paramilitary units raided an access point and camp belonging to the Gidimt’en Clan of the Wet’suwet’en.

Gidimt’en members and supporters were defending their territory from Coastal GasLink, a subsidiary of TransCanada Corp.—now going by the name TC Energy—which was granted an injunction in late November to deal with Indigenous people defending their lands.

Bellegarde asked Lucki “for assurance…that talks will continue [with Wet’suwet’en leadership] and peace will be maintained,” the note says.

“The Commissioner said that as long as all sides are talking there will be no action,” it continues, adding Lucki stated the “RCMP has to take action if there are Criminal Code offenses but that is the only situation in which they will act.”

On Jan. 7 the RCMP arrested 14 individuals during their raid of the Gidimt’en access point along a remote service road about an hour outside the town of Houston, B.C.

The event garnered international media attention and brought the Wet’suwet’en struggle for jurisdiction and sovereignty to the fore.

In an unusual move prior to enforcing the injunction the RCMP released a statement interpreting the 1997 Supreme Court of Canada (SCC) Delgamuukw decision, which affirmed the Wet’suwet’en have never ceded their 22,000 square kilometres of lands.

But the RCMP’s take on the landmark case stated that, because the Supreme Court ordered a new trial, and since that trial hasn’t happened, “Aboriginal title to this land, and which nation holds it, has not been determined.”

After public backlash for what many perceived as an attempted justification for the RCMP’s forthcoming actions, the force retracted the statement.

On Jan. 9, two days after the raid, Wet’suwet’en hereditary chiefs and the RCMP reached a tentative agreement to let pipeline workers through the Unist’ot’en access point, which has kept industry out of the territory for almost a decade.

The following day an agreement was reached that will see the Unist’ot’en control the access point while allowing pipeline workers and police through.

That agreement also includes the establishment of a temporary RCMP “detachment” and a police presence to ensure the safety of Unist’ot’en House members who say they’ve faced threats of violence from locals in recent years. 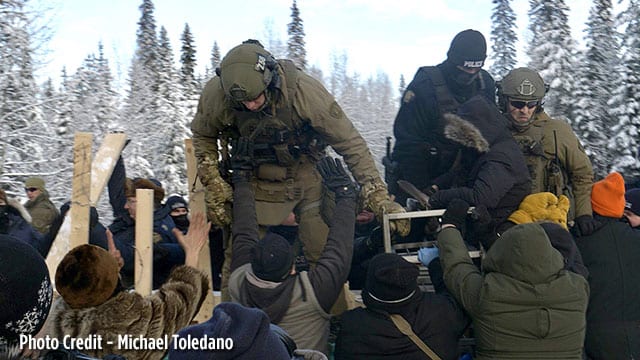 Members of the RCMP tactical and paramilitary units raid a peaceful camp on territory belonging to the Gidimt’en Clan of the Wet’suwet’en Nation on Jan. 7, 2019. Photo: Michael Toledano.

A statement from RCMP media relations Tuesday said Lucki and Bellegarde “have spoken on this matter and are in frequent contact on a wide range of issues.

“The RCMP supports continued efforts for a renewed, nation-to-nation relationship, based on recognition of rights, respect, co-operation, and partnership.”

Na’Moks told APTN Monday that he appreciates Bellegarde’s support in the matter.

Bellegarde and the AFN serve as an advocacy group for First Nation bands, chiefs and councils established by Canada under the Indian Act.

But in a Jan. 8 statement he called the RCMP’s “use of force against people people” at the Gidimt’en camp “a violation of human rights and First Nations’ rights.

“Building consensus under duress will make the resolution of the situation in Northern British Columbia very difficult,” he said. “Real consensus will be built when the parties, with very different views, come together in meaningful and productive dialogue.”

On Monday Bellegarde raised the issue with Prime Minister Justin Trudeau and several cabinet ministers at a meeting in Ottawa.

He told Trudeau the RCMP’s actions were “not respectful of our laws, of our people’s rights,” and that “First Nations law was vetoed by Canada’s domestic laws in the assumed Crown sovereignty over our lands and territories.”

Na’Moks said he’s glad Bellegarde raised the matter with Trudeau, “because the more people realize that we were the peacekeepers in this, and that we were actually invaded — I think the public needs to know that.”

On Monday RCMP held a press conference in Surrey, B.C. to brief media on the situation.

RCMP Assistant Commissioner Eric Stubbs said the RCMP would conduct a standard review of their operation, which will include reviewing video footage of the arrests, but that as of Monday they “have not yet identified any issues regarding police officer conduct.”

Stubbs also referred to the territory Wet’suwet’en were defending as “traditional” and did not use the term Unist’ot’en, Gidimt’en and others refer to as “unceded”.

The issue of title and jurisdiction has been front and centre of the conflict.

Na’Moks said he wants it to be known that Wet’suwet’en hereditary chiefs have not struck a deal with CGL, only with the RCMP.

Stubbs thanks the hereditary chiefs during Monday’s press conference.

“It’s clear to me [that] the level of trust between the RCMP and the Hereditary Chiefs now in place will continue to play a direct and positive role going forward.”

Responding to the comment Na’Moks said that “at this point in time we don’t have trust” with the RCMP, and that “that trust has to be built.”

He said the Wet’suwet’en chiefs only made the agreement “for the safety of our people” against the threat of further action from the RCMP, and that they are “still adamantly opposed” to the pipeline.

In a statement released Friday, the same day RCMP and hereditary leaders brokered the deal, CGL President Rick Gateman said that a “positive solution enabling us to peacefully cross the bridge and public access road, allowing work to progress, has been achieved.”

He reiterated the company’s agreements with the elected chiefs and councils of the Wet’suwet’en Nation to build the pipeline through the territory.

“I credit this achievement to a commitment to respectful and meaningful dialogue demonstrated by all parties involved in our discussions with the Wet’suwet’en Hereditary Chiefs and RCMP.”

Since the RCMP’s enforcement of the injunction solidarity rallies and demonstrations have continued across the country.

On Wednesday Wet’suwet’en hereditary leaders will be joined by Grand Chief Stewart Phillip of the Union of B.C. Indian Chiefs in leading a rally and march outside the Dze L K’ant Friendship Centre in Smithers.

Phillip has called the situation a “crisis” and demanded intervention by the provincial and federal governments.