Jorge Barrera
APTN National News
It was after she saw her mother crying in the Attawapiskat hospital when Amy Hookimaw, 13, realized she was loved.

Amy said she was on Potato Island with a group of friends Friday when their talk turned to darkness. She said the group then went for a walk on the winter road where the Nishnawbe-Aski Police service (NAPs) tracked them down. The officers were acting on reports of concern for the well-being of the youth.

Her mother, Elizabeth Mattinas, 35, who received a call earlier, was already waiting for her at the hospital in tears.

Mattinas said she was overwhelmed with emotion.

“I just broke down,” said Mattinas.

Attawapiskat, a Cree community which sits 90 kilometres away from a De Beers diamond mine in Ontario’s James Bay region, is gripped by a suicide crisis. The band council on Saturday declared a state of emergency after recording 11 suicide attempts in a 24-hour period. This followed a spike in suicide attempts and ideations recorded by local medical staff in March. That month saw 28 reports of suicide attempts or ideations, according to the data.

Attawapiskat Chief Bruce Shisheesh said in a brief cell phone interview Monday he was in Attawapiskat’s hospital dealing with another suicide attempt reported that morning.

“I am tired, overwhelmed,” said Shisheesh. 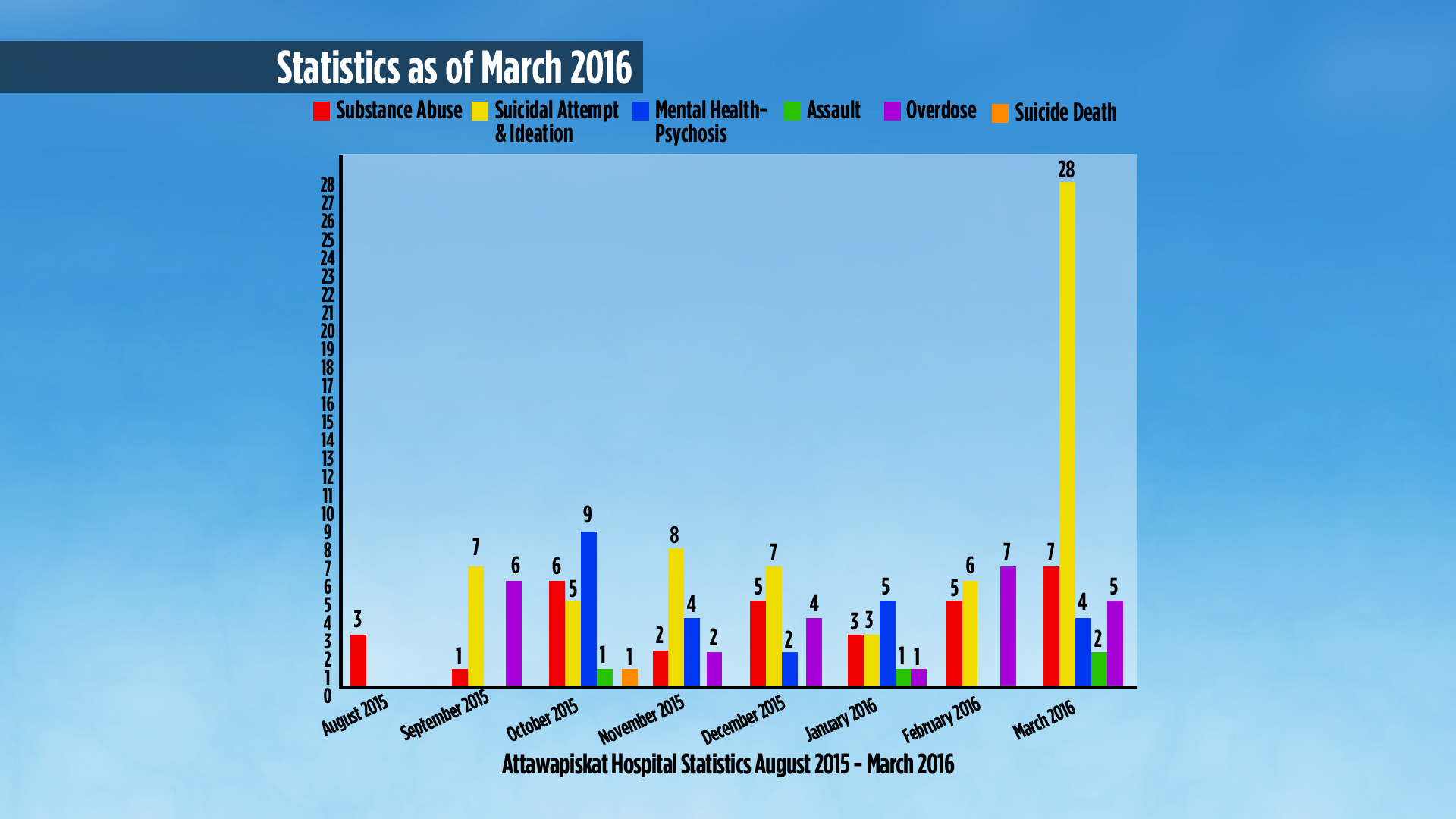 This tragedy took root in October with the suicide death of a 13-year-old girl named Sheridan Hookimaw, according to her aunt Jackie Hookimaw.

“It has been very traumatic and Sheridan’s siblings are very traumatized,” said Hookimaw, in an email exchange with APTN.

On Friday night, after she left the hospital, Amy wrote about her feelings in a now widely-shared Facebook post.

“I didn’t know that people cared about me, but people do care,” wrote Amy. “And the people reading this right now feeling that nobody cares, but there (are) a lot of people that really do care.”

Amy said many youth in the community feel neglected and friends around her have fallen prey to these dark thoughts. One of her 12-year-old friends overdosed on Friday and was sent to hospital outside the community.

“She almost didn’t make it,” she said.

Amy said she took a rope away from another friend.

“I threw it away,” she said. “I have four friends, five friends who overdosed themselves.”

She said many youth feel alone.

“They say that nobody asks them if they are okay or not,” said Amy. “I tell them that people do care and they say that they don’t and I have to repeat myself over and over to tell them.”

She said she’s heard this kind of talk from children as young as nine and 10.

Part of the problem, Amy said, is that youth do not have any place go in the community for entertainment.

“They should do activities more often,” she said. “They should open up something at least for the youth to have fun.” 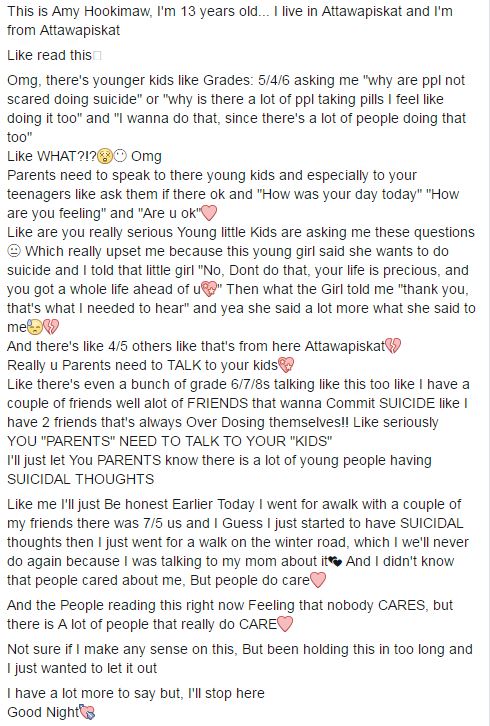 Her mother said parents need to talk to their children more. She also said the community sees a lot of bullying.

“There is big bullying going on in town,” said Mattinas, who is a single mother of eight children.

Health officials said additional counsellors were on their way to Attawapiskat to bolster front-line services and provide relief to the ones who are already there. NAPs is also trying to find a way to give their own officers a break and are working with the OPP to try and find additional reinforcements.

The Ontario Ministry of Health said in a statement its Emergency Medical Assistance Team will deploy to support the community. Ontario Premier Kathleen Wynne also said Monday Ontario’s Health Minister Eric Hoskins along with Children and Youth Services Minister Tracy MacCharles would be travelling to the community this week.

The crisis was also discussed during question period in Ottawa Monday as NDP MPs Romeo Saganash and Angus pressed the government to not only respond to the emergency, but ensure there was a long-term plan to help the community up.

Health Minister Jane Philpott said Attawapiskat’s suicide crisis was “one of the most serious and pressing tragedies that our nation is facing.”

Assembly of First Nations National Chief Perry Bellegarde also called for Ontario and Ottawa to deal with the unfolding crisis.

“The situation in Attawapiskat is sadly felt by far too many First Nations across the country,” said Bellegarde, in a statement.

The regional Mushkegowuk Council, which represents Attawapiskat, has been calling out for help since the beginning of the year following the release of their report into a suicide epidemic that has ripped through its seven member communities. Between 2009 and 2011, the report said about 600 children and youth had either thought about or attempted suicide.

The Council said the region has averaged one suicide a month since October 2015. In Attawapiskat’s neighbouring community of Fort Albany First Nation, a 28-year-old single mother committed suicide on March 5 and her story was included in a letter sent that same month to Philpott by Mushkegowuk Council Grand Chief Jonathan Solomon.

“My heart is aching and broken due to the fact that we are continuing to lose young people to suicide,” wrote Solomon in the letter dated March 8. “Our communities continue to do their best with existing available resources and efforts to reduce our unpredictable suicide pandemic, but we are struggling with and need intervention and support from Ontario and Canada. I am sure that you notice that the suicide disease is reaching unprecedented levels…this is a national pandemic and we need immediate action from all levels of government.”

At the grassroots level, community members are also trying to win the fight against the darkness. A group of youth from Attawapiskat, Kashechewan and Fort Albany went on a healing walk last week down the same winter road where Amy found her way back to the love of her mother.