An 800-year-old cedar is being transformed into a totem pole in Port Alberni, British Columbia.

The work was commissioned by the First Nations Education Foundation (FNEF) as a 20-metre symbol of reconciliation to celebrate the United Nation’s International Year Of Indigenous Languages.

“If we depended on somebody else to do this for us it wouldn’t have got done,” said Nuu-Chah-Nulth master carver Tim Paul.

“The federal and provincial government across Canada throw around reconciliation, but as far as I am concerned the real reconciliation is here.”

Paul carved his first two models when he was 11 years old and has been carving ever since.

Luckily his residential school sentence didn’t rob him of his skills, like it did his people’s language.

“One year we got home and asked my mom, ‘Don’t speak to us anymore, speak English’ and my mom said, ‘That is the sorriest and saddest thing I ever did, I agreed with you,'” he said.

“I never, never should have.”

(The Language Revitalization Pole is being carved from an 800 year old cedar in Port Alberni, B.C. Photo: Laurie Hamelin/APTN)

Speaking one’s own language was literally beaten out of many Indigenous children all across Canada.

Paul said his new project, the Language Revitalization Pole, represents his team’s determination to preserve Indigenous culture and language for the future.

“For me I have the language of a 10-year-old boy and what we are saying is that we have to save what we have left,” said Paul.

“We are the only ones yet so far that have re-built – we re-build this bridge for ourselves and this here is something that our people and our family are going to be proud of.”

Les Doiron, chief executive officer of FNEF, said the project started with an idea for an app and evolved to incorporate the totem pole.

“In 2015, I was elected as president of the Yuułuʔiłʔath government, Ucluelet First Nation and I quickly realized that our language is suffering and that our fluent speakers are almost at zero,” said Doiron.

“This isn’t just about Nuu-Chah-Nulth or my tribe – this is about Indigenous peoples around the world.” 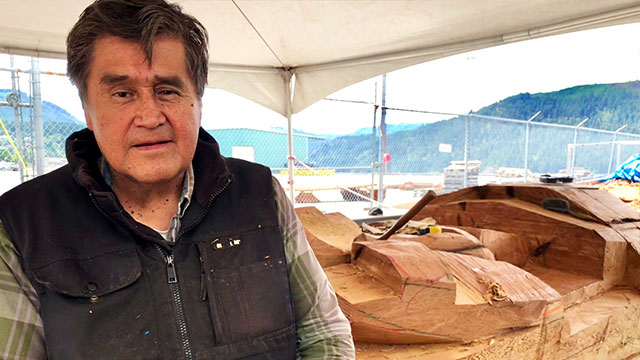 (“As far as I am concerned the real reconciliation is here,” says master carver Tim Paul. Photo: Laurie Hamelin/APTN)

The ancient cedar was donated by their neighbours in Huu-ay-aht territory.

“We got it on the ground only to realize that there was a lot of rot on the inside of it,” said Doiron.

“Tim and the team started gutting it and took the rot out because they wanted to stay with this log.  The reason being it’s a form of reconciliation and it’s also the way that we live, we don’t waste anything.”

Harry Lucas is one of many community members volunteering his time on the project.

He’s one of the last from Nuu-Chah-Nulth fluent in his language.

“It’s very rare I find anyone to converse with now,” said Lucas. “I talk to myself a lot.”

“I answer myself and talk to myself in the language to keep it in my head.”

Lucas spent 11 years in residential school starting in the  1940s.

He said students had to be very secretive when speaking their own language.

“It was like an underground thing that we had to do,” said Lucas.

“We couldn’t do it in school.” 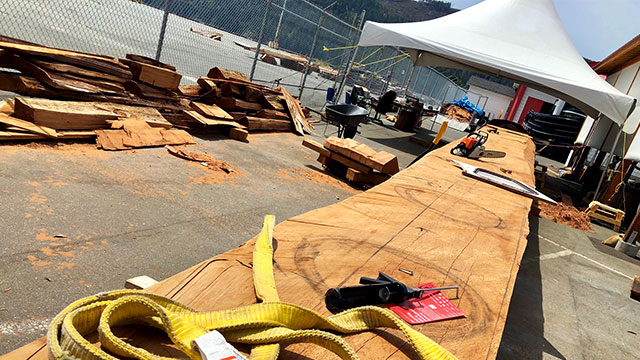 (“This project is going to go on whether the governments jump on board or not,” says Les Doiron. Photo: Laurie Hamelin/APTN)

The team working on the totem all have different skills.

Some have no experience at all, but are eager to learn.

“Our team – if you watch – one guy is cutting, the sawdust is flying and the other guy is coming in right behind them,” said Doiron.

Although the project is searching for funding to support it, Doiron said the pole will be finished come hell or high water.

“This project is going to go on whether the governments jump on board or not,” said Doiron.

“This is what this baby means, this is part of the reconciliation and we need to reconcile, we need to have this awareness around the world.”

The Language Revitalization Pole is expected to be finished by November.

APTN News will follow its progress and re-visit this story in the fall.

“This totem pole will tell a story to anybody that wants to hear it and see it – and it will be narrated by Harry and Tim Paul,” Doiron said.